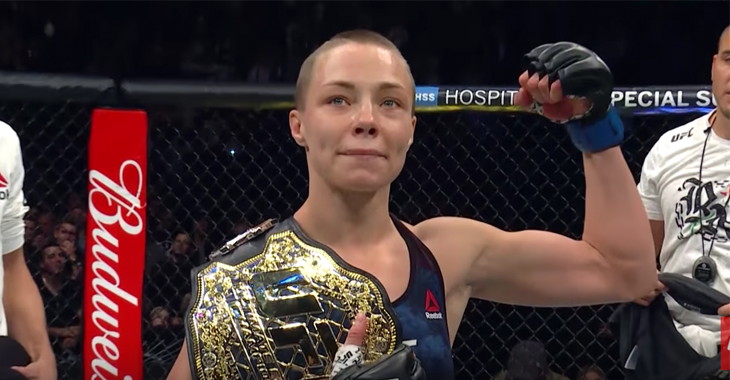 Rose Namajunas was stone cold leading up to UFC 217 where she was a big underdog going up against Joanna Jedrzejczyk, who was looking for her sixth straight title defense.

Nothing seemed to have gotten Namajunas off her focused mindset, not even Jedrzejczyk placing her fist on “Thug’s” face during their staredown days before their fight.

It all came down to letting her actions speak louder than words. Namajunas dropped the champion twice in the very first round and finished Jedrzejczyk with strikes on the ground after dropping her the second time to become the new UFC women’s strawweight champion. “This was a fight of mental warfare,” Namajunas said on Monday’s episode of The MMA Hour (transcribed by Marc Raimondi for MMA Fighting). “I beat her at her own game. I think each time that I wasn’t giving her nothing, she needs that. She needs somebody to fire back. I just wasn’t gonna do it and I just stuck with it. It definitely took a lot of restraint on my end, it took a lot of control. It took a lot out of me to do it. But I knew that’s what I had to do. I knew that’s the way to beat her is to shut her mental game down.”

Namajunas did just that with her mental game and beat her in the fight game as well. After winning the UFC title, “Thug” opened up during the post-fight presser stating that she wants to set a good example for those watching her as a mixed martial arts champion.

“It felt like good prevailed for once,” Namajunas said. “I feel like we’ve been in kind of a dark time these past few years and there’s always gonna be good and bad. We need the villain sometimes. It makes for an interesting story. I think people can relate. They love the Rocky story, they love the underdog. That’s what happened.”