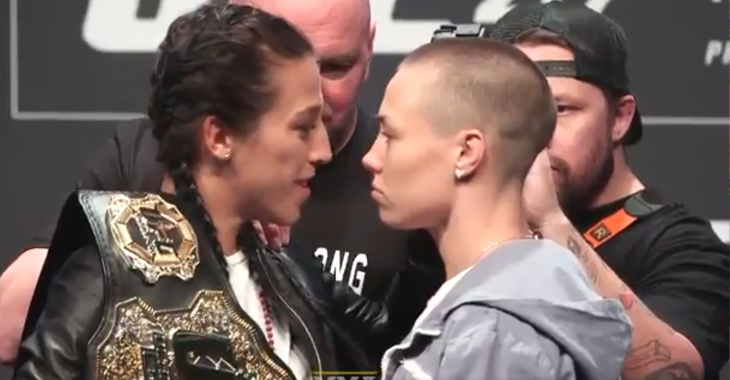 It was last Friday when probably the most intimidating women’s fighter on the planet stomped across the stage to stare into Rose Namajunas’ eyes. She’s basically dominated every UFC strawweight title hopeful in violent fashion. She’s known for her staredowns. Sometimes she’ll crouch down in some sort of animalistic way, making sure her face is glaring right into her mostly shorter opponents. However, things weren’t exactly the same at the UFC 217 press conference. Joanna Jedrzejczyk tried to shoot her laser glance at Namajunas but she just stood there, staring right through her. She didn’t seem intimidated, she seemed focused and cold. Rose Namajunas recently spoke about not being beat before the fight even starts.

“I think that they almost lose the fight [with Joanna Jedrzejczyk] before it even starts. You see that with all the greatest in the world or all the greatest of all time. They all have this intimidation factor and it’s for a reason. It’s not just, ‘Oh, they play mind games.’ They can smell it off of them. They’re not joking around. I think that a lot of the opponents she’s faced, not all of them, but they’re afraid of her and it shows.”

“I’m definitely the most complete fighter she’s ever faced. I have that going into it. I have the previous title fight experience going into it. I have a lot of things going for me. It all really comes to do to desire and want and what is the reasoning behind what I’m doing and when I have those things in line, I snap into myself. I become something that is just a work of art and it’s hard to touch.” — Rose Namajunas speaking to FloCombat.

Some may argue it’s too soon but Rose Namajunas, but it could be exactly the right time. Jedrzejczyk fought her way farther and farther the roster, as Namajunas just kept fighting up. If she can manage to take out Joanna Champion, she’ll not only win UFC gold, but stop a dominant champ who looks to be enjoying her prime. If Jedrzejczyk beats Rose Namajunas, she’s only 25 with her entire career left ahead of her. Even a new women’s division is opening up. All of that aside, can we begin to talk about how exciting their fight at UFC 217 will be? Along with Jessica Andrade and Claudia Gadelha’s scrap, this could he women’s Fight of the Year.

.@joannamma and @rosenamajunas share an incredibly tense staredown at the #UFC217 Press Conference. How do you see this one going? pic.twitter.com/dXb5V5ZgNj