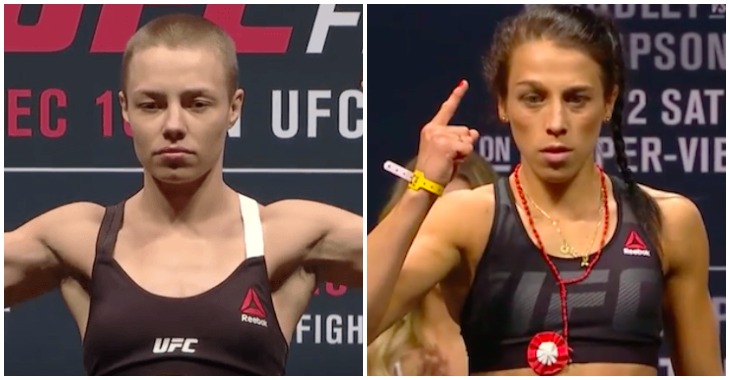 Last weekend, in the co-main event of UFC on Fox 24, strawweight star “Thug” Rose Namajunas scored an epic win over the game Michelle Waterson, dropping her with a second-round head-kick, and finishing her off with a rear-naked choke. With this win, Namajunas seems to have earned herself a shot at the winner of Joanna Jedrzejczyk and Jessica Andrade’s upcoming strawweight title fight, which will serve as the co-main event of UFC 211 on May 13 in Dallas, Texas.

On Monday’s edition of The MMA Hour, Namajunas weighed in on the possibility of a strawweight title fight – particularly on a potential showdown with the current champ Jedrzejczyk, who does not seem to be a fan of hers.

“Why wouldn’t I want to fight her? Namajunas continued. “She’s the best!”

Namajunas then explained that, when it comes to Jedrzejczyk and Andrade, she has no preference as far as her next opponent goes.

“It don’t matter to me,” she said. “I think that [Jedrzejczyk’s] style is a very exciting matchup for me. I think that that would be a great challenge. But if she doesn’t win, then she’s not the best after that point, so… I’m not attached [to a fight with Jedrzejczyk]. It’s nothing personal. I just want to fight the best.”

Finally, Namajunas explained that, though the UFC has not confirmed anything just yet, she believes she will indeed get a crack at the Jedrzejczyk vs. Andrade winner.

“They didn’t specifically say it –nothing specific about that,” she said. “It’s pretty obvious. You don’t wanna set nothing in stone. It’s a little too soon to be making new fights already, they’ve still gotta fight first. But I’ll be there watching [in Dallas].”

How do you think Rose Namajunas would do against Joanna Jedrzejczyk and Jessica Andrade? Sound off, PENN Nation!