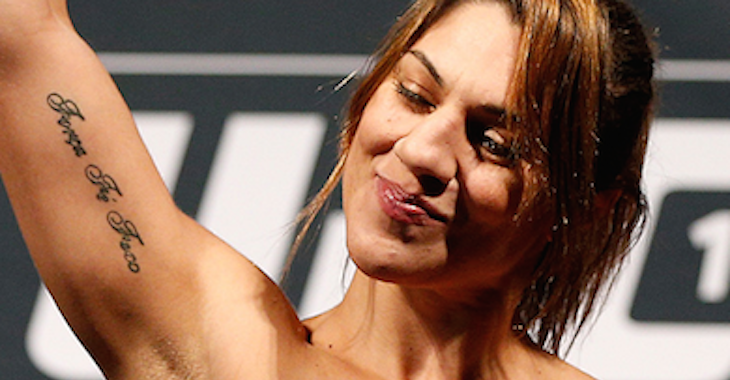 This June 17, the UFC will return to beautiful Singapore with a very exciting looking night of fights. Atop this latest Singapore card will be a women’s bantamweight bout pitting former champion Holly Holm against former title challenger Bethe Correia.

Both Holm and Correia are strikers by trade. In terms of striking accolades, however, the former boxer Holm is the far more decorated of the two women. That, however, is not interfering with Correia’s confidence.

Speaking to FloCombat.com, Correia explained that she is more than confident in a prolonged striking battle with the former champion Holm. In fact, she believes she could defeat Holm in a straight-up boxing match.

Correia then commented on Holm’s recent losing streak, which has seen her give up consecutive fights to Miesha Tate, Valentina Shevchenko and Germaine de Randamie. In her opinion, Holm is far too experienced in the world of combat sports to be thrown off by a patch of adversity.

“She had losses in boxing and maybe she is just used to defeats,” Correia said. “She always tries to get herself together after a loss. There are people, like Ronda, that get so shaken up they even think of retiring. I do not like to lose. That is why I don’t think about my defeats. I just think about winning. And Holly, for sure, is not mentally unstable anymore.

Do you think Bethe Correia can hang with Holly Holm on the feet? How do you think she’d do in the boxing ring?