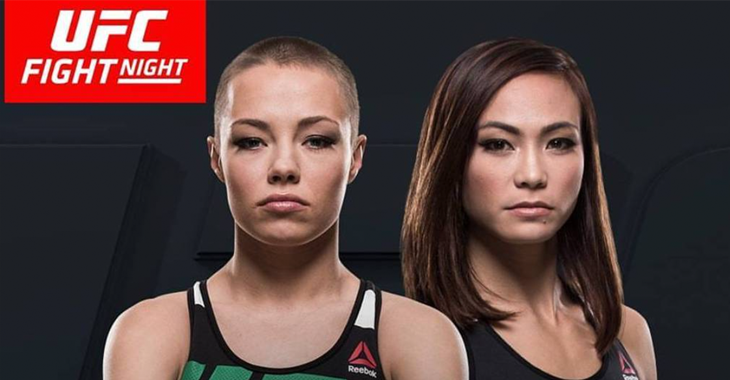 Rose was able to catch “The Karate Hottie” with a brutal high kick early in the second-round that sent Waterson crashing to the canvas. (Watch that here).

From there, Rose was able to dominate Waterson on the floor eventually locking up a rear-naked choke hold which forced Michelle to tapout.

Here is how the pros reacted to Rose Namajunas’ impressive submission victory over “The Karate Hottie”:

Rose looking like a much improved version of herself. #UFCKansasCity

THIS FIGT IS FUCKING AWESOME! I loved watching both these women since Invicta… this is 1 of the most technical fights I've seen in a while

That was surprisingly one-sided. Great to see these young fighters improving so quickly. #UFCKansasCity

Great fight @rosenamajunas and @karatehottiemma ! Congrats Rose! Next ones the best one Michelle. #GodBless

Thug Rose like a fucking gangsta!! She's another level of animal!! #UFCKansasCity

@rosenamajunas congrats your the next champion no doubt about it!! the focus was laser sharp tonight!

Great fight @rosenamajunas and @karatehottiemma ! Congrats Rose! Next ones the best one Michelle. #GodBless

Get the full Rose Namajunas vs. Michelle Waterson UFC on FOX 24 fight recap below: