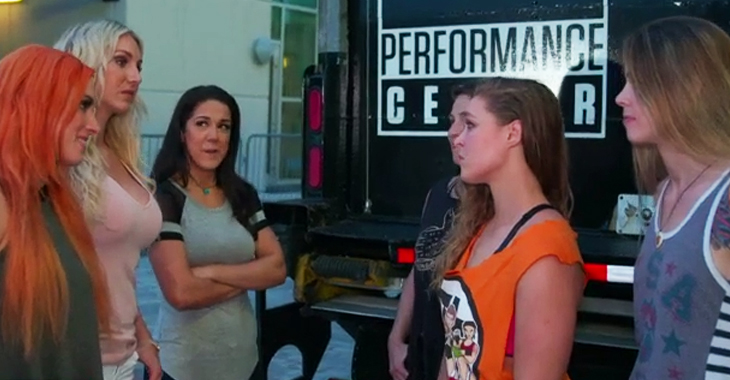 After months and months of speculation, it looks like Ronda Rousey has finally signed on the dotted line with the WWE. According to Dave Meltzer’s Wrestling Observer Newsletter, Rousey is not only training at the WWE’s performance center, but preparing for a huge match at Wrestlemania 34 in New Orleans. It would pit pro-wrestling’s all-female Four Horsewomen against MMA’s Four Horsewomen: Charlotte Flair, Becky Lynch, Sasha Banks and Bayley wrestling Ronda Rousey, Shayna Baszler, Jessamyn Duke and Marina Shafir.

This angle was teased awhile back as the WWE stable interrupted Ronda Rousey’s interview. This was after Rousey was seen multiple times on WWE television, cheering on her friend and recently-signed WWE superstar Shayna Baszler during the Mae Young Classic tournament. Triple H and Stephanie McMahon both have dropped her name in interviews, saying that the opportunity is there for Ronda Rousey, all she had to do was say the word.

Nothing official has been announced yet and just like with the UFC, every thing is subject to change and there’s no telling what may happen. However, Ronda Rousey has been inching closer and closer to the professional wrestling world ever since her UFC departure so it seems only inevitable for it to happen sooner rather than later. A huge card like Wrestlemania would be the proper time to do it.