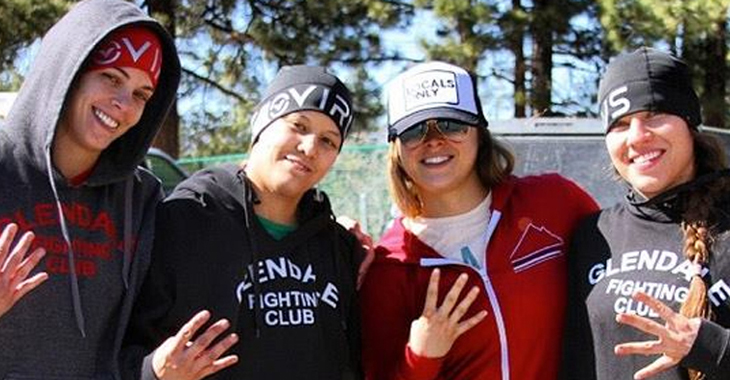 Just last week, Triple H sat down on ESPN and talked about former UFC bantamweight champion Ronda Rousey. He said that he and Rousey were in talks and that the door was always open for her to come wrestle in the WWE. That led us to believe that Rousey was close to stepping inside those ropes and doing a little more than just hip tossing someone, but we had no idea how close it actually was. Just yesterday, Ronda Rousey was featured in an official WWE video being confronted by Charlotte Flair, Bayley and Becky Lynch.

Charlotte Flair: “Oh, not today? We’re waiting to hear from you…” Ronda Rousey was standing right there with Jessamyn Duke and Marina Shafir. The only person missing to form their Four Horsewomen MMA stable was WWE Mae Young Classic contender Shayna Baszler. The three WWE wrestlers stopped the women in their tracks to put Rousey on the spot for her answer, perhaps teasing a future wrestling match. Could the entire women’s MMA stable really jump ship to the WWE?

As huge as the WWE is, it’s not every day that four athletes like this just jump in your lap. If Rousey truly is angling toward joining the WWE and wants to take the rest of her friends with her, the WWE may have some big new stars on their hands. Shayna Baszler is already ripping it up in the tournament and Marina Shafir is also engaged to Roderick Strong, a current athlete in WWE’s NXT developmental territory.