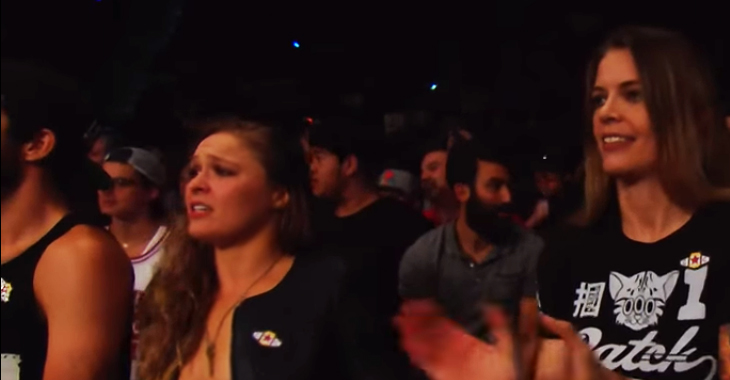 Everyone knows Ronda Rousey and what her presence brings to any appearance or event, but it was one of her friends that enjoyed the spotlight during WWE’s all-women Mae Young Classic tournament. Shayna Baszler tore through the tourney, the former UFC fighter blending pro wrestling with her combat skills in exciting ways. Meanwhile, Rousey took a backseat and cheered on one of her own from the stands with the other members of her Four Horsewomen.

After an awesome match that should propel women’s wrestling in a new direction, Baszler clutched her ribs in defeat as Kairi Sane ended up with the trophy in the finals. Even though Shayna Baszler saw herself end up on the wrong end of Sane’s spectacular elbow drop, she made a huge impact on the tournament which only continued her hype from the work she put in around the indie pro wrestling circuit. Ronda Rousey was moved to tears by the performance and the outcome, something that the WWE captured on camera.

The WWE hasn’t been shy about keeping Ronda Rousey in the discussion as far as wrestling goes. Not only did Triple H say they were ‘having conversations‘, but they’ve filmed a backstage confrontation continuing to tease the former UFC bantamweight champ’s decision to join the WWE or not along with Baszler, Jessamyn Duke, and Marina Shafir. It’s still all talk at this point, but even if Rousey decides to say out of the ring, the WWE already have their big MMA transplant star in Shayna Baszler.