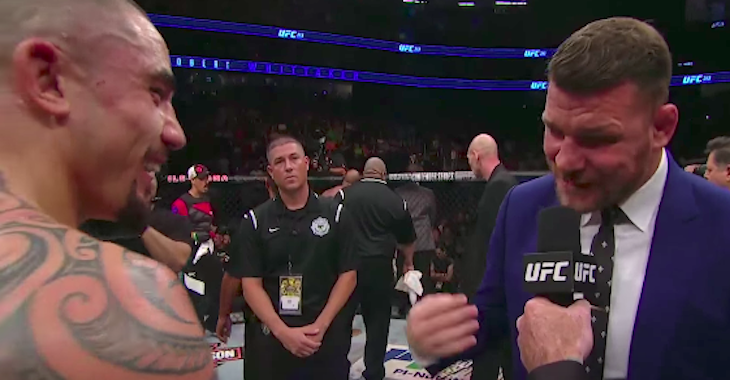 Last night, in the main event of UFC 213, Kiwi-Australian star Robert Whittaker captured a unanimous decision win from the streaking Yoel Romero, and won the UFC interim middleweight title as a result. In the moments after this impressive win, the 26-year-old interim champion was joined in the cage by the 38-year-old undisputed champ, Michael Bisping.

As is expected any time Bisping gets ahold of the mic, a memorable moment ensued.

Whittaker had the first word:

“We were destined to fight, mate,” he told the undisputed champ, referencing their briefly scheduled 2015 bout. “I think it’s fate, it really is. I’m happy to keep your seat warm until you’re better. Give me a breather and we’ll give it a good crack, yeah?”

Bisping then replied, first commending Whittaker and Romero for their great fight, then going all-in on some trash talk of the new interim champ.

“First of all Robert, that was an awesome fight,” Bisping replied. “Romero, well done. I wanted to come in here and talk a lot of shit, but it was an awesome fight. But the fact that you’re standing there with that fucking belt on, like you’re a champion, makes me sick! You should be ashamed of yourself.”

Bisping then threw his own title on the ground in a dramatic display.

See the pair’s full exchange below:

The date of Whittaker and Bisping’s anticipated title unifier is not yet known. It is expected to occur later this year, however.

Who do you think wins the fight between champions Robert Whittaker and Michael Bisping?