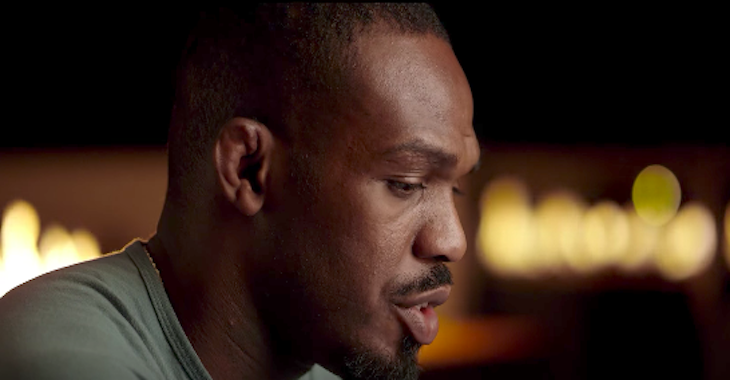 Originally, last night’s UFC 213 was supposed to be the biggest card of the year thus far. Thanks to an unfortunate series of events, however, that title now belongs firmly to UFC 214, which goes down on July 29 in Anaheim California.

This card will feature a whopping three title fights. The first will go down at featherweight, where Cris “Cyborg” Justino will collide with Tonya Evinger for the vacant throne. The second will occur at welterweight, where champ Tyron Woodley will attempt to defend his title against crafty grappling whiz Demian. The third, and biggest by a mile, will occur at light heavyweight, where champion Daniel Cormier will take on his fiercest rival – and the only man he’s lost to – Jon Jones.

Last night, on the main card of the injury-riddled UFC 213, the UFC shared an incredible promo for Jon Jones and Daniel Cormier’s anticipated UFC 214 rematch. This chilling promo immediately got the MMA world buzzing, as we all checked our calendars to see how many goddamn days are left between now and the 29th.

See this fantastic promo in full below:

Cormier will enter this fight having recently defended his title for a second time with a submission defeat of Anthony “Rumble” Johnson. This win was preceded by a lopsided decision defeat of Anderson Silva in a non-title bout, a tooth-and-nail decision win over Alexander Gustafsson, and another submission win over Rumble, which earned him the light heavyweight crown.

Jones, meanwhile, has been out for more than a year due to a laundry list of troubles outside the cage. In his last fight, he scored a tepid decision defeat over Ovince St. Preux. His next most recent bout saw him defend the light heavyweight title with a decision defeat of Cormier. He was stripped of the title shortly thereafter.

Who do you think wins Daniel Cormier and Jon Jones’ UFC 214 rematch?