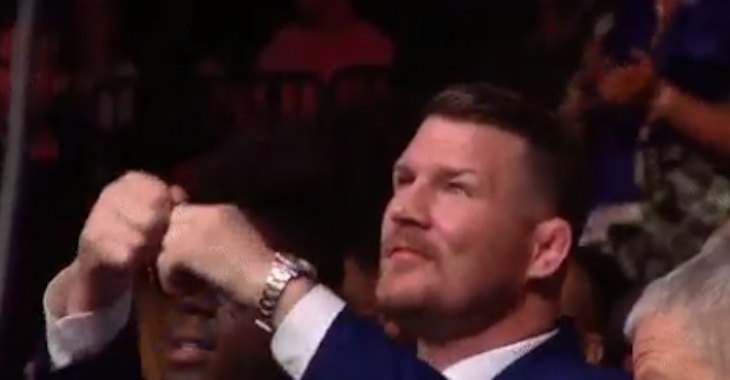 In advance of this fight, Bisping made no secret of the fact that he wanted Whittaker to win.

“I’ve got nothing against Robert Whittaker,” Bisping said on a recent episode of his podcast Believe You Me. “Fine young man, great fighter, fights hard, got a lot of respect for him. Can’t say the same about Yoel. Yoel is certainly not on my Christmas card list. We all know my thoughts on him. He’s a scumbag, he’s a cheat, and that’s that. So if they do fight I, hope Whittaker beats the brains out of him.”

Needless to say, the undisputed champ is not a Romero fan. Mid-fight, his dislike for Romero manifested itself once again, as he drew a small cuban flag from his jacket, ripped it up, and threw the shreds at the Romero.

See a clip of this moment below:

In the end, Bisping got his wish, as Romero gave up an early lead to lose rounds 3, 4, and 5 and ultimately lose a unanimous decision to Whittaker. With this result, Bisping is now expected to face Whittaker in a title-unifying showdown sometime later this year.

Do you think Michael Bisping and Yoel Romero will ever fight?