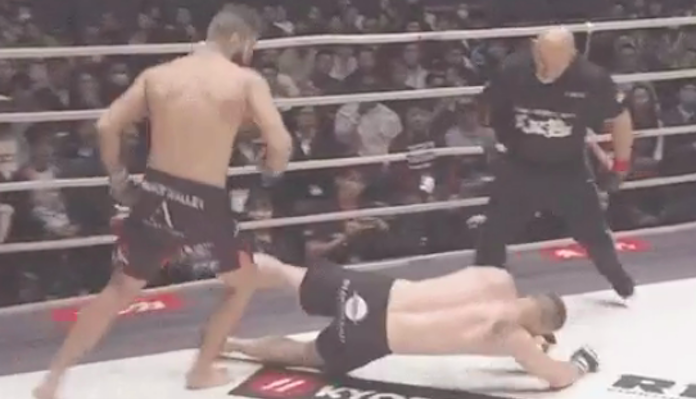 CB Dollaway’s RIZIN debut, which went down on Tuesday’s action-packed RIZIN 20 card, didn’t go the way he had planned. Instead, the 20-fight UFC veteran was decimated by the promotion’s ferocious light heavyweight champion Jiri Prochazka in the first round.

Literal and figurative kicks cannot save C.B. Dollaway, as Jiří Procházka (26-3-1) clatters the 20-bout UFC vet to keep his light heavyweight strap. The Slavic samurai rides a 10-fight tear with eight straight knockouts. He owns 25 finishes, 23 in round one. #RIZIN20 #RIZINFF pic.twitter.com/bu4vz7FzGf

Post-fight the Czech knockout artist was called out by reigning Bellator light heavyweight and heavyweight champion Ryan Bader, who challenged him to a fight in the Bellator cage. This cross-promotional fight was briefly rumored earlier this year, but never came to fruition. Given the way RIZIN and Bellator have been co-promoting of late, it seems entirely possible that it goes down in 2020.

Congrats #jiriprochazka . we couldn’t make it happen in @rizin_PR so let’s do this in the @BellatorMMA cage. LHW title on the line

“Congrats Jiri Prochazka . we couldn’t make it happen in @rizin_PR so let’s do this in the @BellatorMMA cage. LHW title on the line” – Ryan Bader on Twitter.

See the full results from Tuesday’s epic RIZIN 20 card below:

Kai Asakura vs. Manel Kape — Kape def. Asakura by TKO (punches) at 0:38 of Round Two
Tenshin Nasukawa vs. Rui Ebata — Nasukawa def. Ebata by TKO (three knockdowns) at 2:42 of Round One
Ayaka Hamasaki vs. Seo Hee Ham — Ham def. Hamasaki by split decision
Mikuru Asakura vs. John Teixeira — Asakura def. Teixeira by unanimous decision
Lindsey Vanzandt vs. Rena Kubota — Kubota def. VanZandt by TKO (corner stoppage) at 4:42 of Round Three
Tofiq Musayev vs. Patricky Freire — Musayev def. Freire by unanimous decision
Jiri Prochazka vs. CB Dollaway — Prochazka def. Dollaway by KO (punch) at !:05 of Round One
Vitaly Shemetov vs. Simon Biyong — Biyong def. Shemetov by TKO (submission to punches) at 0:58 of Round Two
Shintaro Ishiwatari vs. Hiromasa Ogikubo — Ogikubo def. Ishiwatari by split decision
Jake Heun vs. Satoshi Ishii — Heun def. Ishii by TKO (punches) at 1:12 of Round One
Yuki Motoya vs. Patrick Mix — Mix def. Motoya by submission (guillotine choke) at 1:37 of Round One
Taiju Shiratori vs. TAIGA — Shiratori def. TAIGA by TKO (cut) at 3:00 of Round Two
Miyuu Yamamoto vs. Suwanan Boonsorn — Yamamoto def. Boonsorn by unanimous decision
Luiz Gustavo vs. Patricky Freire — Freire def. Gustavo by TKO (punches and soccer kick) at 0:28 of Round One
Johnny Case vs. Tofiq Musayev — Musayev def. Case by TKO (punches) at 2:47 of Round One