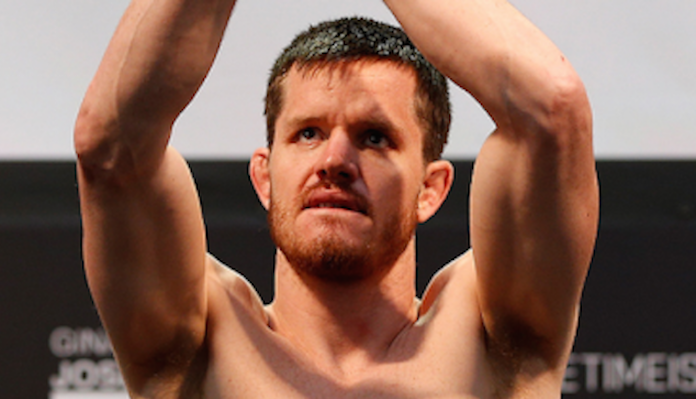 After receiving a two-year suspension from the United States Anti-Doping Agency (USADA), middleweight veteran CB Dollaway has parted ways with the UFC. Yet his fighting days are not over yet.

On Tuesday, it was announced that Dollaway has signed with Japanese promotion RIZIN Fighting Federation. Dollaway will make his RIZIN debut on the promotion’s big New Years Eve show, where he’ll take on the reigning light heavyweight champion Jiri Prochazka.

Dollaway’s two-year USADA suspension is the result of a number of failed tests, as detailed in a August statement from the agency.

Dollaway, 35, tested positive for anastrozole, growth hormone releasing peptide 2 (GHRP-2 or pralmorelin), a metabolite of GHRP-2, and GHRP-6 as the result of an out-of-competition urine sample he provided on December 19, 2018. Anastrozole is a Specified Substance in the class of Hormone and Metabolic Modulators, while GHRP-2 and GHRP-6 are Specified Substances in the class of Peptide Hormones, Growth Factors, Related Substances and Mimetics. All of these substances are prohibited at all times under the UFC Anti-Doping Policy, which has adopted the World Anti-Doping Agency (WADA) Prohibited List.

Dollaway also tested positive for clomiphene in an out-of-competition urine sample collected on February 9, 2019. Clomiphene is a Specified Substance in the category of Hormone and Metabolic Modulators and is prohibited at all times under the UFC Anti-Doping Policy.

Additionally, Dollaway received an over-the-limit intravenous (IV) infusion on December 13, 2018. IV infusions and/or injections of more than 100 mL per 12-hour period are prohibited, except for those legitimately received in the course of hospital treatments, surgical procedures, or clinical diagnostic investigations.

Despite this long list of violations, Dollaway has maintained his innocence, claiming he inadvertently came into contact with substances in question in Mexico.

While this suspension rendered him ineligible to compete in the UFC, RIZIN operates outside the jurisdiction of USADA, meaning Dollaway is free and clear to compete the organization now that his UFC contract has been terminated.

How do you think CB Dollaway will do in the RIZIN ring?