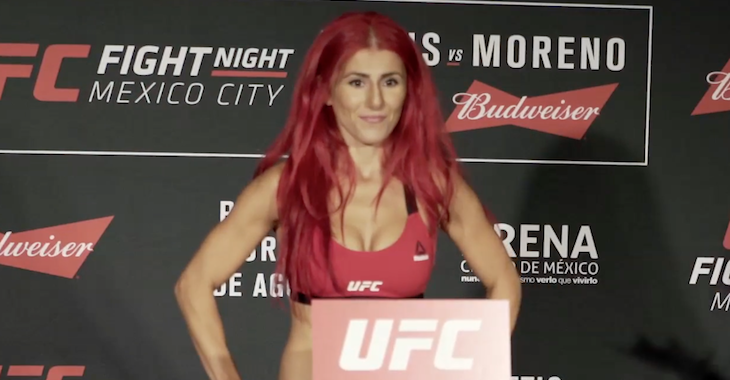 Last night, in the co-main event of the UFC’s latest trip to Mexico City, Mexico, Randa Markos attempted to build on the momentum of a career-best defeat of former strawweight champion Carla Esparza with a win over highly regarded Mexican prospect Alexa Grasso. Though Markos was forced to take Grasso on in her home country, at altitude, and at a 119-pound catchweight due to Grasso’s weigh-in miss, she performed very well, giving her young foe plenty of problems. Unfortunately for the Canadian and her team, Grasso was ultimately awarded a split decision win.

Needless to say, things didn’t go the way Markos planned. And while she seems to understand the fight was close, she feels she should have received the nod. The frustrated Canadian gave her assessment of the fight on Twitter, and also explained that she feels she deserved Fight of the Night honors – even if Grasso was ineligible due to her weigh-in miss.

“I believe I won last night,” Markos wrote. “It was close, but I won. Was told that even though Alexa didn’t make weight I was still able to win [Fight of the Night] this is discouraging shit.” With this result, Grasso returns to the loss column after her impressive defeat of Esparza. Grasso, meanwhile, rebounds from the lone defeat of her young career, which was dealt by dangerous veteran Felice Herrig.

How did you score UFC Mexico’s Randa Markos vs. Alexa Grasso fight? Do you think the judges got it right, or do you understand Markos’ frustration? Join the conversation in the comments section!