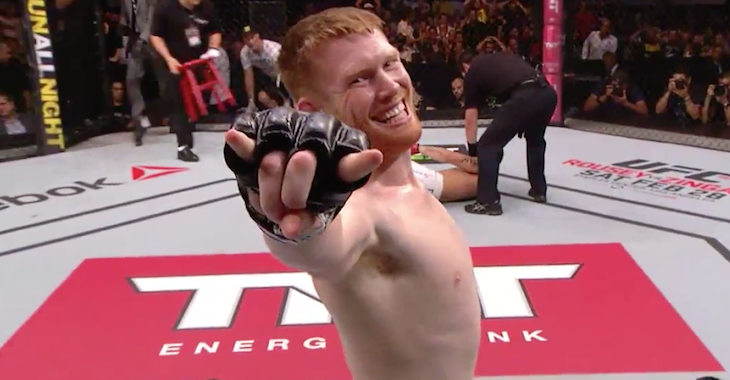 Last night, on the main card of the UFC’s latest trip Mexico City, Mexico, middling middleweight contender Sam Alvey picked up one of the biggest wins of his career, out-duelling former UFC light heavyweight champion Rashad Evans to a slow, but commendable split decision win. It did not take long for Alvey, who trains under the tutelage of MMA legend Dan Henderson, to call out the fighter he hopes to take on next: Vitor Belfort.

Alvey made this callout in a conversation with MMAFighting.com, explaining that he hopes to defeat as many of Henderson’s former foils as possible on a “2017 vengeance tour.” Alvey then weighed in on his battle with Evans, saying he’s disappointed with the split win, and explaining that he feels he gave the UFC legend Evans too much respect.

“I’m incredibly disappointed in myself with only a split decision,” Alvey said. “I wanted to make a dominant statement. I’m a finisher and it’s been too many fights now since I’ve finished someone. I’ve gotta figure it out.”

“He’s been an idol of mine in MMA. He’s been either one or two in my favorite fighter list. I’ve gotta say Henderson number one, because he’ll beat me up if I don’t. I think I gave [Evans] too much respect on how good his shot was, how good everything he did was. I just refused to throw that third punch, I refused to press like I really wanted to.”

Do you want to see Sam Alvey battle Vitor Belfort?