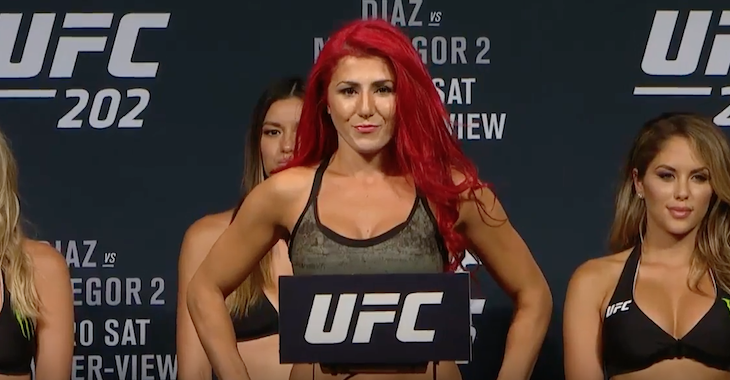 Round one begins and Markos starts off by throwing a jab. She is very light-footed here. Esparza comes forward with a right that misses. The former champ is clearly looking for a takedown here. Randa continues to circle and keep her distance. Markos with a nice jab. Esparza presses forward but opts not to dive in for a takedown. Both ladies land lefts. Esparza connects with a right over the top. Markos goes to the body with a jab but Carla connects with a pair of rights. Randa circles out and then leaps in with a good right. Both women trade punches in the center of the octagon. Randa circles out and avoids a right from Carla. Esparza shoots in and scores a takedown. She is in north-south position here. Randa scrambles and looks to lock up an inverted triangle. She uses the position to throw some good body shots. Randa transitioning for an armbar here. She lets go and begins hammering Carla with punches. Esparza gets back on top and lands a couple of lefts to close out round one.

Round two begins and Markos misses with a left to start. Carla charges forward with a combination and lands a right. A good jab comes through for Markos. Carla responds with one of her own. Esparza ducks under a punch and lands a nice combination. Randa fires back with a good counter. She scores with a jab. A good right hand finds a home but Carla comes back with a knee. Esparza charges forward with a combination. Randa counters her with a right hand. Esparza charges in and lands a hard right hand over the top. Again Carla charges forward but this time she eats a pair of jabs from Randa. Markos pushes Carla against the fence and lands a couple of good shots. They break. Esparza shoots in and scores an easy takedown. She moves to side control and then to mount. She locks in an arm-triangle choke and it is tight. 30 seconds remain. Ranada is throwing punches here. She does so until the horn sounds to end round two.

Round three begins and Randa presses forward early. Carla shoots for a takedown but Randa defends. Markos lands a nice spinning back fist on the break. She needs more of that. Esparza misses with a kick. Carlo charges forward and lands a right. Randa replies with a hard right of her own. Carla leaps in and lands a right. Randa fires right back with one of her own. Esparza shoots in but Randa defends. Good knee from Carla but Randa lands a right. Two and a half minutes remain. Randa pumps her left jab. Esparza charges forward with punches but none of them land. Esparza shoots for a takedown but Randa stuffs it. Good punches from Markos. Carla dives in for a takedown and gets it. Randa quickly gets up but eats a knee. She breaks free of Carla’s clinch. That knee may have been illegal. Randa counters Esparza with a left jab. She lands another left. Carla shoots but the takedown is not there. Randa lands a right hand. Carla shoots again and this time she gets it. Round three comes to an end.