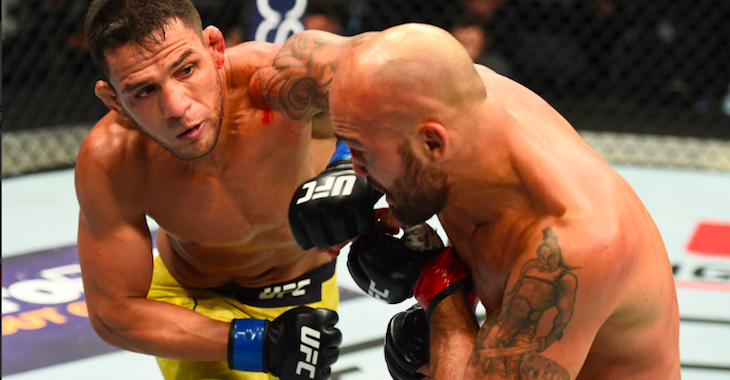 How we were able to get Robbie Lawler fighting both Donald ‘Cowboy’ Cerrone and former UFC lightweight champion Rafael dos Anjos in the same year is beyond our comprehension. Those are two fights anyone looked and and decided they were buying whatever card they were on immediately. Lawler and dos Anjos did not disappoint at UFC Winnipeg. It was a wild and brutal brawl that ended up with dos Anjos coming out on top with an unanimous decision. Unfortunately in the process, it looks like he injured Robbie Lawler’s knee.

“The guy’s leg was destroyed. [Robbie Lawler] blew his ACL and meniscus and every other thing that’s in your knee out in like the third round. Wobbled over to the fence, laid against it, and asked [Rafael] dos Anjos to come in so they could just bang it out. Robbie Lawler went to the fifth round.” — Dana White speaking to YAHOO! Sport’s Kevin Iole.

The words used by Dana White here aren’t hyperbole. MMAWeekly’s Damon Martin was able to confirm with sources close to the fighter that he did end up with a torn ACL and meniscus during the main event of UFC Winnipeg. To know that was the case and that Lawler continued on, shouldn’t surprise anyone, but it still does. That man is a very special type of an individual. You can’t train that kind of toughness and it resulted in a ridiculous fight.

No word on when Robbie Lawler would receive surgery or how long he would be out, but he’s been even as far as wins and losses go in his last four fights against the absolute elite in the division. As for Rafael dos Anjos, he’ll continue pushing for the title shot against UFC welterweight champion Tyron Woodley. After three wins straight and his performance against the former champ in mind, he’s right there in contention. We wish Robbie Lawler a speedy and full recovery.