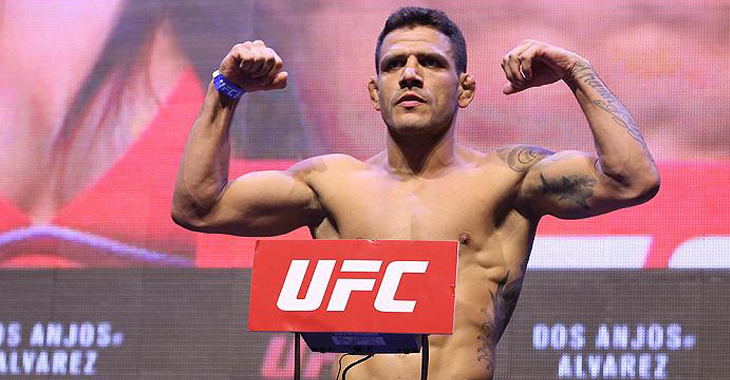 Back in July of 2016, UFC lightweight champion Rafael dos Anjos stepped into the Octagon in hopes of defending his lightweight title for the second time when he fought Eddie Alvarez.

It took just three minutes and 49 seconds for Alvarez to finish the champ, claiming the lightweight championship as he landed a barrage of strikes that forced the referee to stop the fight. Following his loss to Alvarez, Dos Anjos stepped into the Octagon with streaking lightweight contender Tony Ferguson for a highly anticipated lightweight matchup that would determine the lightweight #1 contender. While a win for Dos Anjos would have likely put him on a fast track to a lightweight title fight, Tony Ferguson out-struck the former champ, picking up a unanimous decision win and ‘Fight of the Night’ honors in the process. Following the loss to Ferguson, Dos Anjos announced that he would be moving up to welterweight because it wasn’t worth making the cut to 155 pounds anymore.

In a new interview, Dos Anjos spoke to media members this past weekend, which was transcribed by MMAJunkie to explain why he won’t be making the cut to 155 pounds anymore:

“I think the ideal date for me would be any day in June,” he said. “So I’m here in Fortaleza to have (conversations) because I know I’m going to have a fight soon. I have no idea about an opponent or where, but I’ll be ready in June.

“I want to fight one of the top guys. I was thinking about fighting Jorge Masvidal, but he’s fighting Demian (Maia), because me and Jorge, we’re the only two guys to beat Donald Cerrone in his last 15 fights. Now, I have no idea. I’m a former lightweight champion, and I want to fight the top guys in the division.”