Earlier this year, former UFC welterweight champion Rafael Dos Anjos announced his intention to move up to the welterweight division, citing a tiresome cut to the lightweight division’s 155-pound cap as the reason for the move. After being called out by several dangerous welterweights – such as the rising Colby Covington – Dos Anjos was ultimately pencilled in for a welterweight debut opposite former Strikeforce welterweight champ Tarec Saffiedine. The pair will battle on June 17 in Singapore, not far from Evolve MMA were Dos Anjos has done much of his recent training.

In advance of this anticipated showdown, Dos Anjos spoke with MMAFighting.com to discuss the fight itself and his future in the division:

“I think Tarec Saffiedine is a great opponent for my first fight at welterweight,” the former lightweight king said. “That’s exactly what I wanted, a top-10 [opponent]. I’m a former lightweight champion and I believe I deserved to fight someone ranked, and Tarec is also a former world champion, a former Strikeforce champion. It’s going to be a great fight.”

Dos Anjos then touched on the challenges of this fight with Saffiedine, and how he plans to win:

“There’s no easy path [to victory], especially at the highest level, but I will use all my game,” he said. “I think that something I haven’t used much in my fights is my wrestling, my jiu-jitsu, but I’m a complete fighter. But I will trade with him, and if he gives me opportunities there, I will use my game. I’ll walk forward the entire time, like I always do. I think I’ll be stronger in this division, won’t suffer with that violent weight cut. I think I will perform better in this weight class.” 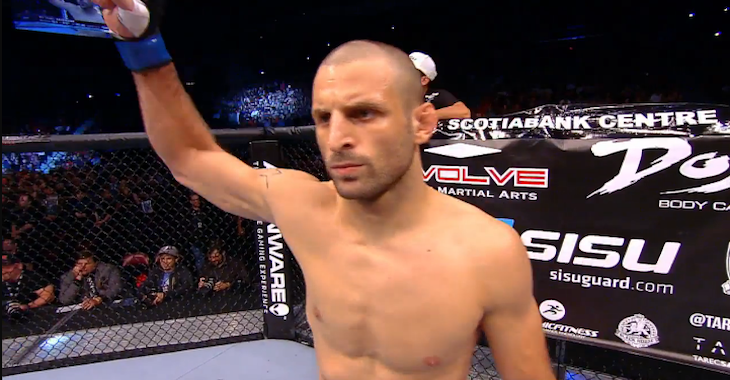 Dos Anjos also explained that he’s been sparring with larger training partners like middleweight champ Michael Bisping to prepare for this challenge.

“I have been sparring with bigger guys,” he said. “[I] trained a few times with Michael Bisping and the guys Bisping takes to the gym.”

Ultimately, of course, Dos Anjos’ goal is to work his way through the welterweight top-10 and earn himself the divisional crown  – something he believes he can do.

Do you think Rafael Dos Anjos is capable of capturing welterweight gold? Sound off, PENN Nation!