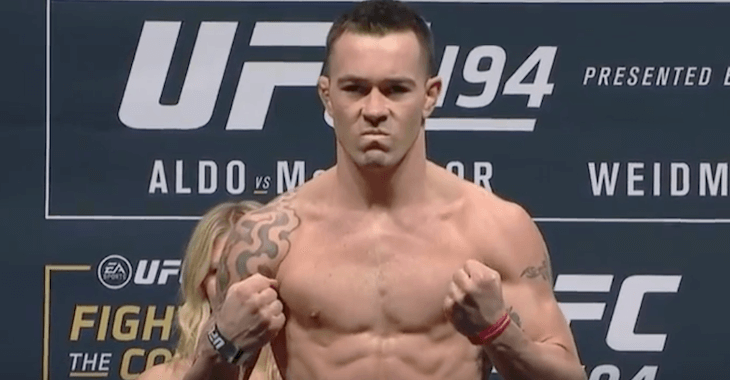 Earlier this year, former UFC lightweight champ Rafael Dos Anjos announced his intention to move up to the welterweight division. Shortly after the former champ made this announcement, he began fielding callouts from a number of notable welterweights. Of all the welterweights to call Dos Anjos out, however, none did so with quite the same fervor or creativity as rising star Colby Covington.

Unfortunately for Covington and his fans, Dos Anjos ultimately opted to sign on for a fight with former Strikeforce champ Tarec Saffiedine, which will go down when the UFC returns to Singapore on June 17.

On Wednesday’s edition of BJ Penn Radio, Covington explained his reasons for calling out Dos Anjos. The main reason, he said, is that Dos Anjos was comporting himself with an air of entitlement.

“He was just acting entitled,” Covington said. “I don’t care what you’ve done in the past. Cool, you were a champion at 155 in the past, but you’re on a two-fight losing streak at 155. You think you’re going to come and skip the line at 170?

“You ain’t jumping to the front of the line,” he continued. “I’ve been here dominating this weight class, winning most of my fights. He’s not going to come in, act entitled, and get a contender-type fight. That’s what I’m looking for. That’s what’s real. This faker, if he thinks he’s going to fight these guys, he needs to fight a guy like me. But obviously he scared. He ran from that challenge and he told Sean Shelby I was too dangerous of a fight.”

Covington then explained that he was keen to fight Dos Anjos because he believes the former champ has changed quite a bit since the UFC partnered with the United States Anti-Doping Agency (USADA).

“He looks different now,” Covington said. “USADA changed the game man. He doesn’t look all jacked up like when he fought [Anthony] Pettis. He looks like a f*ckin’ soft pillow-top down comforter now”

Finally, Covington recounted his initial reaction to the news that Dos Anjos had chosen a fight with Saffiedine over one with him.

“It was a weird reaction, because Saffiedine had kind of been turning him down for two weeks,” Covington said. “I had my manager Dan Lambert, the owner of American Top Team, hitting up Sean Shelby letting him know ‘hey I’m ready to fight, let’s fight. Rafael wants to fight in Singapore, let’s do it. Let’s be close to his Evolve gym in Asia. Let’s do it, I’m the guy. I’m the perfect guy’”

“I was pissed when that happened, but I think it happened for a reason. I think something better is going to come out of it from this. So stay tuned.”

Do you think Colby Covington should have gotten his desired fight with Rafael Dos Anjos? Sound off, PENN Nation!