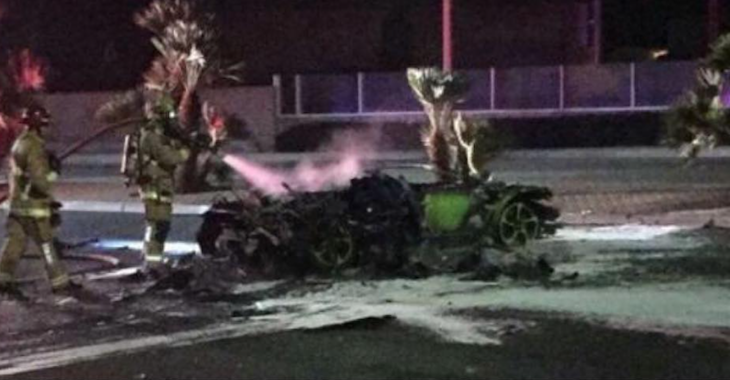 Former UFC champion Quinton ‘Rampage’ Jackson, who is currently under contract with Bellator MMA, is frequently taking to social media to show off his luxurious cars, most of which are green. Just over a week ago, the former champ took to Instagram with a video showcasing a “pimped out” garage in order to hold his “green toys’ also known as his flashy cars.

One of the vehicles which caught the attention of Rampage’s social media followers was a green Lamborghini which boasted a “raging bull” decal on the front windshield, however in a new social media post this week, Rampage revealed before and after photos of the car, with the ‘after’ photo showing the car completely destroyed. The photos were accompanied by a statement from Jackson on the incident, in which he revealed that thankfully no one was hurt:

“This song is Dedicated to my Lambo in that gansta lean.. why did u have to go so soon.. it seems like yesterday day we was riding around the hood,but I’m gonna keep your memory alive like a owner should.. a life time of memories…. going down the drain.. I’d like to keep cruising,but I can’t get past the pain.. haha damn I’m gonna miss my green girl. (I wasn’t driving,nobody got hurt) #thankGod”

Rampage responded to one of the comments on the post, in which he stated that he was joking about being too heartbroken over the car, although he was glad nobody was hurt in the wreck.

“Hahahaha I’m already looking at new shit.. I don’t love things,I never to attached. Had to laugh cause nobody got hurt”

Jackson is currently once again signed to Bellator MMA, returned to the UFC in 2015 where he defeated Fabio Maldonado at UFC 186 after going 3-0 in Bellator. The return was a short lived one despite the fact that Jackson was excited to be back with the promotion despite their rocky past. While he intended on remaining with the UFC, he ultimately reached a settlement with Bellator MMA without the pair having to go to court. Earlier this year, Rampage defeated Satoshi Ishii via split decision at Bellator 157. Since then there has been no word on when he will return to the cage.