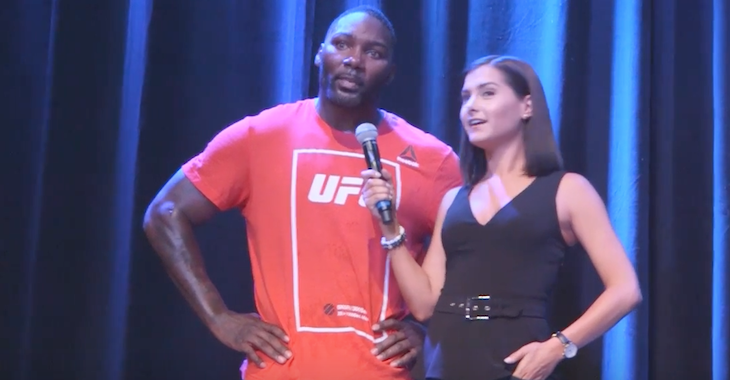 We all know Anthony “Rumble” Johnson has some explosive knockout power.

Out of all the big fights and sparring he has had throughout his career, who do you think “Rumble” puts at the top of his list for hitting him the hardest?

The UFC light heavyweight was asked the question recently and the answer may surprise you. Johnson was asked, “Of all the punches you have ever taken, who is the hardest to have ever hit you?”

“Two people,” Johnson stated. “Kevin Burns, when I was fighting at 170 and Andrei Arlovski when I fought him at heavyweight in the World Series of fighting.”

Johnson has fought in quite a few different weight classes throughout his career and it is hard to believe the knockout specialist used to be able to make 170.

Johnson and Burns met in the Octagon twice in 2008. In their first fight, Burns was awarded a highly controversial TKO over Johnson after an accidental eye-poke from Burns sent Johnson to the mat and referee Steve Mazzagatti called an end to the fight in favor of Burns. The two would rematch later that year where Johnson was able to avenge his controversial loss, knocking Burns out in the third round with a nasty head kick.

In a heavyweight bout in the World Series of fighting in 2013, Johnson went toe-to-toe against former UFC heavyweight champion Andrei Arlovski. The two battled to a decision after three rounds where Johnson was awarded a unanimous decision.

“Rumble” will get his second chance to get hold of the UFC light heavyweight title as he rematches UFC light heavyweight champion Daniel Cormier at UFC 206 in Toronto, Canada on December 10. Johnson and Cormier met at UFC 187 in May of 2015 where Cormier was able to survive an early onslaught from Johnson. “DC” eventually ended up securing a rear-naked choke on Johnson forcing him to tap at 2:39 of the third round.

How will the rematch go? Will Johnson be able to KO the champ and take the light heavyweight title? Or will Cormier defend his belt and hold his place at the top of the 205 division? Give us your prediction in the comment section for their fight on how and when the fight ends!