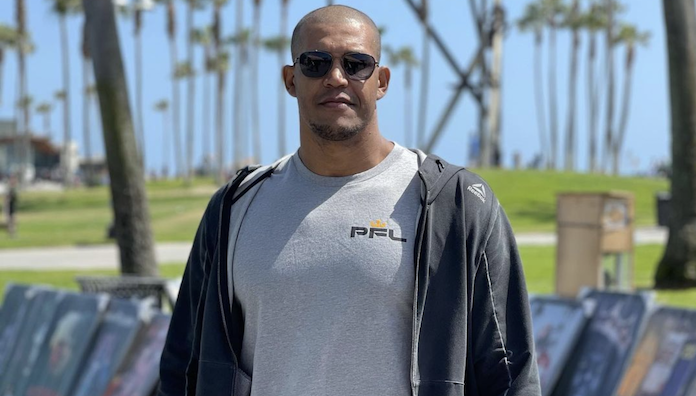 Ferreira picked up the biggest win of his career when he finished Werdum with strikes in a big upset at PFL 3 last month, but the result of the contest was overturned to a No Contest. The New Jersey Athletic Control Board ruled that Ferreira had tapped out to a submission attempt from Werdum moments before the finish happened. Ferreira remains adamant that he never tapped, but video evidence appeared to be inconclusive either way. Regardless, the result of the fight was overturned, which means Ferreira gets one point instead of six in the PFL heavyweight bracket. Werdum also gets one point due to the overturned result.

There was talk of an immediate rematch due to the controversy, but the fight isn’t happening next as Werdum was booked to fight Brandon Sayles instead, while Ferreira fights the defending PFL heavyweight champion Ali Isaev. In a statement from Team Renan Ferreira, the Brazilian and his camp blasted PFL’s matchmaking and questioned the New Jersey athletic commission for its decision to overturn the result of the fight so quickly.

“All this is very shady. Ray Sefo told my management team that the Werdum rematch was the fight that made sense to do next. PFL had social media posts asking people if they wanted to see it and they said yes. Now we find out on social media I’m facing the last champion while Werdum faces Sayles,” Ferreira said in a written statement to BJPenn.com.

“I find it interesting how all this is happening. First, we have them interviewing Werdum after our fight but they didn’t interview me. They only showed the replay in slow motion that made it seem I tapped. After that, the Commission changed the result of our fight over the weekend in a decision so fast a lot of people have questioned their procedure. What’s their criteria? We have no idea how the matchmaking works here but some things look kind of fishy.”

Matchups for the final event of the 2021 PFL Regular Season are official!#2021PFL6 pic.twitter.com/R5JNLlIWfd

Though Ferreira obviously wants to get his rematch with Werdum, the Brazilian is now is focused on Isaev, who is a tough fight in his own right. The undefeated champion has been running through everyone in his path but Ferreira is looking to pull off another upset and get the finish, this time clean. But he made it clear that his desire is to fight Werdum next.

“Isaev is a very good fighter and I knew we would cross paths eventually. I’ll be ready for him and I’m gonna go in there to finish him so I move on in the tournament. They won’t be able to protect Werdum forever. I would be embarrassed to be in his place after all the sh*t he said after our fight. I’d be calling PFL to make the rematch happen. But he knows he’d get finished again, he doesn’t want anything to do with me,” Ferreira said.