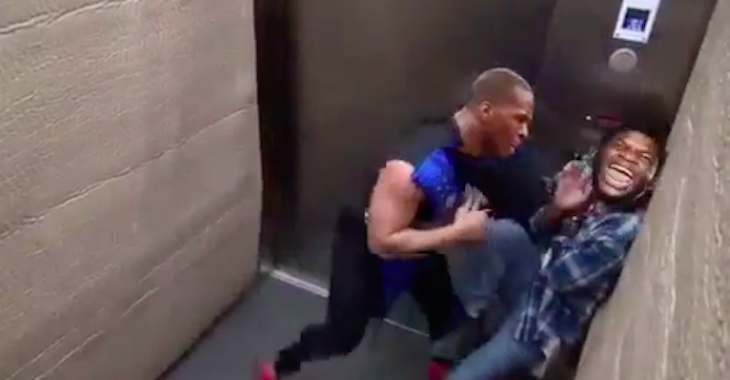 Having dazzled with these flying knee knockouts, it now sounds like Page and Daley will be pitted against one another. According to recent reports, Bellator MMA is working on a bout between the two venomous strikers for its May show in Manchester, England.

As the terms of this bout are being ironed out, Page has already gotten to work with his patented trash talk, having repeatedly roasted Daley on social media over the last few days.

Page began by attempting to goad his rumored foe into signing his contract.

Then, Page posted this hilarious fan edit, which depicts Daley screaming in horror when confronted in an elevator.

Next, Page posted the following image, which implies that Daley is scared to accept this fight.

Finally and most recently, the trash-talking Page shared another picture of a frightened Daley hiding from him.

When we last saw Page in action, he defeated long-time rival Fernando Gonzales in one of the most forgettable fighters ever. His most recent fight before this was his victory of Cyborg. Now 7-0 in the Bellator MMA cage, Page has never lost as a professional mixed martial artist.

Daley, meanwhile, was last seen in the cage in late January, when he crushed Ward. With this win, he rebounded from a decision loss to current Bellator welterweight champ Douglas Lima. At the moment, it is not known whether Daley will actually accept this fight. We do know, however, that he is keen on a bout with UFC veteran and recent Bellator signee, Rory MacDonald.

Who do you think wins a potential Paul Daley vs. Michael Page bout? Sound off, PENN Nation!