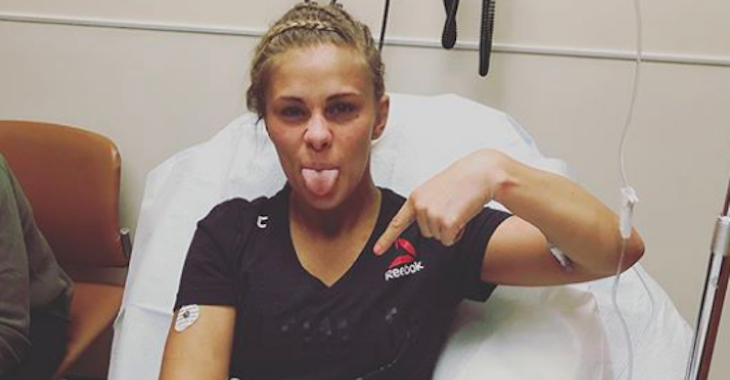 Paige VanZant: “I was giving myself an eating disorder” while trying to make 115-pounds

VanZant recently spoke with BBC where she revealed that cutting down to strawweight was not only taxing on her body but also causing some serious issues:

“I was having different issues with myself and my body,” Paige told BBC. “I was giving myself an eating disorder to make the weight.”

“PVZ” made her flyweight debut at January’s UFC Fight Night 124 event in St. Louis, where she suffered a unanimous decision setback to Jessica-Rose Clark.

Despite suffering both a loss and a broken arm in her most recent fight, Paige VanZant has no plans on returning to strawweight.

In fact, it was an incident just prior to her flyweight debut at UFC St. Louis that cemented VanZant’s decision to remain at 125-pounds no matter what the outcome was in her fight with Clark.

“I was at a fight where a fellow UFC fighter, Uriah Hall, was cutting weight and he pushed himself just to the brink of death. He had kidney failure and started seizing in the hallway right in front of me.” said Paige. “It’s because of that I’m like ‘I cant do this anymore.’”

Paige VanZant’s most recent victory came at UFC on FOX 21 in August of 2016, where she scored an amazing switch-kick knockout victory over Bec Rawlings (watch that here). The 23-year-old is currently nursing her aforementioned arm injury but is hopeful that she will return to the octagon later this summer.

Who would you like to see Paige VanZant fight in her next octagon appearance? Sound off PENN Nation!