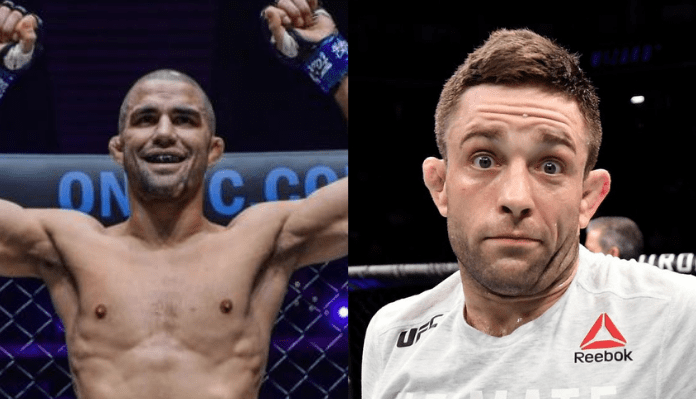 It seems there is no love lost between BJJ icons Garry Tonon and Ryan Hall. Tonon suffered a first round knockout in his ONE featherweight title clash against the latter’s training partner at ONE: ‘Lights Out’ on Friday.

Lights OUT! 💡@ThanhLeMMA 🇻🇳🇺🇸 uncorks a looping right hand on Garry Tonon to close the show and retain his ONE Featherweight World Title! #ONELightsOut pic.twitter.com/GAM5Mn1BlB

In his post congratulating his friend, Hall took a swipe at ‘The Lion Killer’ and wrote,

‘Thanh Le: respectful of his opponent’s great skill and confident in his own abilities won over decades of training. Displays A+ submission defense on the way to an amazing performance over a tough opponent.

Other Guy: disrespectful and dismissive.

What a performance by the champ. So happy to see one of the true good guys in the MMA world continuing to have success he has worked so hard for years to earn.

Thanh’s leglock defense instructional will be out next week ;)’

Tonon did not take kindly to the UFC featherweight’s jibe, and clapped back with a post of his own that ended with a call-out.

‘Grapplers that talk sh** about other grapplers and won’t compete against them are no better than the fat guy on the couch talking shit about how the quarterback should’ve done a better job on Monday night football,’ Wrote Tonon.

‘The option to compete against me or any of my teammates has been on the table for years Ryan. Ever since you first felt the need to talk shit about Eddie Cummings years ago when he had a razor thin match in adcc. I don’t like you. And you’re a hypocrite. You’re right about one thing, Thanh is a good guy. And he deserves to be the champ. You on the other hand should probably look at yourself in the mirror before the calling the kettle black,’ continued the New Jersey native.

‘It’s a shame you had to make your “congratulations” to your teammate about your beef with me. Any interviews I gave while speaking about you leading up to this fight where I was extremely respectful, I deeply regret. I knew you didn’t deserve it, should’ve just trusted my gut. If you ever want to crawl out from whatever rock you live under to fight and not just open your mouth I’ll be right here,’ he added.

To prove his point, Tonon then posted a series of clips and excerpts from pre-fight interviews where he was indeed being very respectful towards Le’s abilities. Subsequently, Hall edited his original post. In the new version, he offers an apology and leaves the door open for a meeting at ADCC in September.

When I made a post this morning congratulating @thanhlemma on his performance defending his @onechampionship belt, I did not set out with the intention of kicking a man when he’s down. That said, it was clearly taken that way by more than one person and I am sorry for it,’ explained the 37 year old.

‘In supporting my friend, I may have read too much into a negative pre-fight assessment of Thanh’s Jiu-Jitsu. My goal was sticking up for a buddy, but in pursuit of that, I ended up doing exactly the type of thing that I would say I’m against,’ he continued.

‘From where I’m sitting, stating that an athlete of Thanh’s level is going to “be surprised at how ill-prepared actually he is” on the mat in spite of his training partners, coaches, and personal discipline is dismissive of both Thanh and the people around him. Still, Garry says that he did not intend it disrespectfully and, as a man, I have to take him at his word,’ added the Fifty/50 fighter.

‘Given the well-documented history of overtly as well as sideways obnoxious behavior that has come from Garry’s teammates towards me and many, many other individuals in the grappling community, I took an uncharitable view immediately. Case in point, the world’s current most successful grappler conducts himself like a jackass on the daily, acting like a petulant teenager who just happens to be a very dangerous and capable individual. Passing that along to Garry, though, was unfair. I was wrong to do so.

What I should have done is simply congratulate Thanh and leave it at that. Moving forward, that’s what I’ll stick to.

Hopefully we can meet up at ADCC 2022 to have an opportunity to address things in a sporting venue. Until then, I hope he heals up quickly and returns to doing fantastic things on the mat and in the ring soon,’ Hall concluded.

Interestingly, Thanh Le has been very vocal about wanting to see collaboration between the world’s biggest combat sports promotions. The idea being that the best fighters from across the planet all have an opportunity to fight each other at some point.
There have been plenty of fans in the comments calling for an MMA fight between Hall and Tonon. There’s certainly an interesting narrative there, while the chances of them settling there differences on the JiuJitsu mat would be much more feasible.
What do you make of the latest exchange between these two legends of BJJ?
This article appeared first on BJPENN.COM