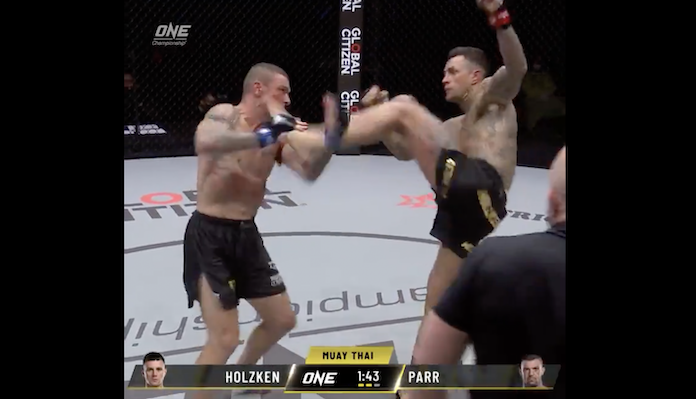 Kickboxing legend John Wayne Parr reacted after getting knocked out by a head kick against Nieky Holzken in a Muay Thai bout at ONE on TNT 3.

The 44-year-old Parr and the 37-year-old Holzken put on four-ounce MMA gloves as they stepped into the ONE Championship cage with each other for a Muay Thai fight. Unfortuantely for Parr, it was not a night to remember as he suffered a vicious knockout when Holzken knocked him out with a high kick. You can see the highlights below.

Following the bout, Parr took to his social media to react to the knockout. Check out what “The Gunslinger” wrote on his Instagram to his fans, letting them know that he’s okay.

Thank you for all the support from around the world. I truly am appreciative of every single comment I have received over the last few days. I trained so hard but today wasn’t my day. I am devastated of course being knocked out as that wasn’t in the script. On the bright side 10 months ago I received hip replacement surgery thinking my time in the sport was done. To be able to overcome the odds and get back in the cage on the worlds greatest promotion on @onechampionship against a killer like @niekyholzken really was a dream come true. Just got a doctor check after that head kick and I feel fine. I’m worried my wife is going to be upset that I’m starting to see other people

Parr is a legend in the world of striking, but after losing in such a brutal fashion, you would have to imagine he will take some time off before he steps back into the ring or the cage. He loves fighting, but a tough knockout loss like this could have him reconsider fighting again after overcoming the odds in the first place following hip replacement surgery.

Do you think John Wayne Parr will continue fighting after getting knocked out by Nieky Holzken?