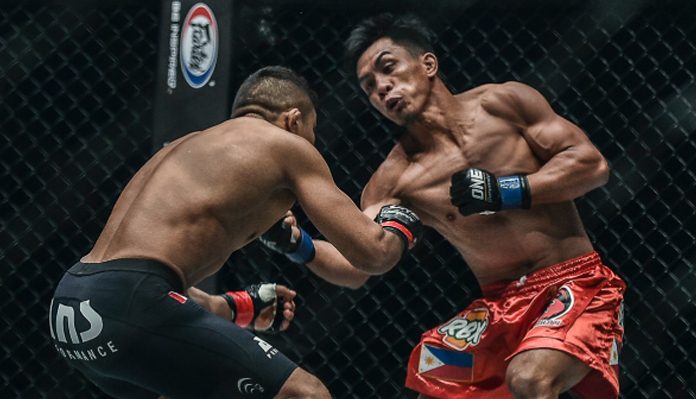 ONE Championship’s first ever Japan event, ONE: A NEW ERA, got even bigger with the addition of a fourth World Title contest to an already stacked card.  The promotion announced the rubber match between ONE Bantamweight World Champion Kevin Belingon and former titleholder Bibiano Fernandes for the spectacle which takes place at the Ryogoku Kokugikan in Tokyo, Japan on 31 March.

This will be the third time the two men have met, and with each man having a win each, the next one will decide the true king of the division.

Kevin Belingon vs. Bibiano Fernandes III joins a card that really couldn’t get much bigger.

ONE Middleweight and Light Heavyweight World Champion Aung La N Sang will defend his middleweight belt against Ken Hasegawa in a rematch of last year’s Fight of the Year thriller.

Then in the main event, ONE Lightweight World Champion Eduard “Landslide” Folayang faces former champion and Japanese legend Shinya Aoki. This bout is also a rematch as Folayang scored a knockout win over Aoki in 2016 to win the title beginning his first reign as champion.

In addition to the now four World Championship bouts, we’ll also see Andy Souwer and Yodsanklai IWE Fairtex battle in a potentially epic kickboxing match. Also, ONE: A NEW ERA will mark the promotional debuts for Demetrious “Mighty Mouse” Johnson and “The Underground King” Eddie Alvarez. Johnson and Alvarez will be competing in the ONE Flyweight and Lightweight World Grand Prix, respectively.

Belingon-Fernandes has turned into one of mixed martial arts’ best rivalries.

The two warriors first clashed in 2016 at ONE: DYNASTY OF CHAMPIONS and Fernandes made his victory look easy. Known for his striking, Belingon was unable to establish anything on his feet.

Fernandes smartly took him to the mat where he knew he’d have a major advantage. Fernandes is one of the world’s best Brazilian Jiu-Jitsu practitioners and he quickly forced Belingon to tap out via kimura.

Leading up to their rematch in 2018 at ONE: HEART OF THE LION, Bibiano Fernandes defended his World Title three more times against top competition including former two-division titleholder Martin Nguyen.

Belingon’s road back to a title shot was a long and arduous one. He won six consecutive bouts to earn another shot at Fernandes, and he made sure to capitalize. After capturing the interim title, Belingon was ready to unify and the rematch with Fernandes was finally announced.

In the rematch, Belingon was far better prepared for Fernandes’ grappling. Thanks to intensified training at Team Lakay, Belingon survived every sequence on the ground and was able to repeatedly get to his feet.

Belingon’s striking and overall game proved to be sufficient and he took home the title on the strength of a split-decision victory.

For a champion of Fernandes’ ilk, such a close loss cannot be an easy pill to swallow. That partially explains why the rivalry was turned to a trilogy so quickly and why ONE Championship ordered an immediate rematch.

As the two run it back this March, one can only hope that fans will finally get a definitive answer as to who is tops in the division. Belingon’s grappling has vastly improved, but as it stands, Fernandes is far greater in this aspect having had years of experience honing his craft.

If Kevin Belingon can establish his dominance and hurt Fernandes early, he could potentially finish the bout within the distance this time. Otherwise, Bibiano Fernandes is just much too dangerous on the mat. With five rounds to operate, Fernandes could have Belingon in a lot of trouble as the match progresses.

It’s an interesting clash of styles and fans should be in for another exciting treat at ONE: A NEW ERA.

This card is perhaps the perfect lineup of bouts for a historic event for the promotion. ONE looks primed to deliver a memorable show to their Japanese fans, and those who tune in from around the globe.