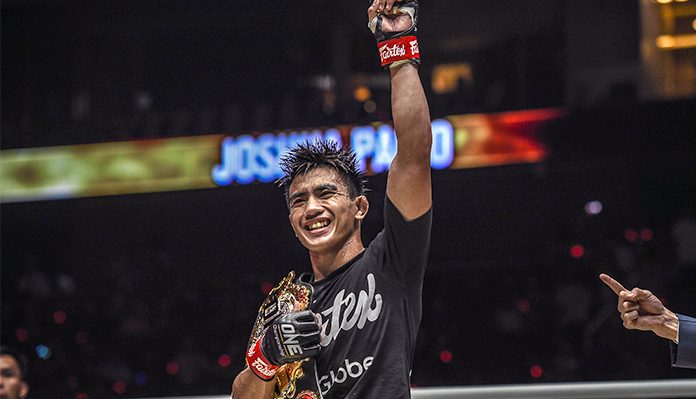 Joshua Pacio is establishing himself as one of the elite champions in ONE Championship with every performance. The 23-year-old successfully defended his ONE Strawweight World Championship at ONE: Masters of Fate in front of his hometown crowd of Manila, Philippines. Pacio scored an impressive second-round submission victory over Rene Catalan.

The win was Pacio’s first defense since regaining his title from Yosuke Saruta in April. He’d been upset by Saruta back in January. In all, it was a pretty strong 2019 for Pacio as he has re-established himself as the king of his division.

What’s next for Pacio? Who could be the first to challenge him in 2020? Let’s take a look at five top challengers to Pacio’s title.

The Catalans are plentiful. Pacio just defeated Rene and back in 2016, he defeated Rabin. However, another Robin Catalan scored his own major victory at ONE: MASTERS OF FATE.

Robin Catalan scored a highlight-reel KO of former Olympic standout and ONE Flyweight World Grand Prix contender Gustavo Balart. Robin has a 10-6 record in his career as he has struggled to sustain consistency. In fact, he has alternated wins and losses in his last five matches.

Because of that up-and-down dynamic, Robin may need to register another significant win before he gets a title opportunity. Still, he has to be as close as he’s ever been to a title shot.

He doesn’t have a ton of professional mixed martial arts experience, but his strength and finishing talents have been on display in his four bouts.

Miao Li Tao is 3-1 as a pro and that includes KO victories in two of his last three matches. In his most recent match, Miao defeated Pongsiri Mitsatit by unanimous decision at ONE: Dawn of Heroes in August.

Miao definitely needs to score one more win before he can hope to challenge Pacio in 2020. That bout is coming up soon. Miao will face Jeremy Miado at ONE: Age of Dragons in a crucial battle this month. The winner may have a strong claim to make for the next shot at Pacio.

Just as Miao has a chance to make a championship-contending statement at ONE: AGE OF DRAGONS, so too does Miado. Truthfully, Miado needs more than just a win over Miao. He has endured far more losses in his recent career, and beating Miao would more expose the latter than it would elevate Miado.

To put it plainly, Miado needs to repair his reputation as a potential title challenger. A win over Miao would only begin what would be an ideal journey back up the ranks. We’ve seen athletes recover from losing streaks and bad patches in the past. Perhaps Miado can be the next to experience that kind of turnaround in his career.

Along with Pacio, the long-time Japanese contender is the only other two-time ONE Strawweight World Champion. In fact, Yoshitaka Naito’s reign is the longest in the division’s history.

Naito is 35 years old, so his best years may be behind him. However, he didn’t look like an old man at ONE: Masters of Fate when he scored a unanimous-decision win over perennial contender Pongsiri Mitsatit.

He’s now won two in a row after another unanimous-decision victory over former champion Alex Silva in May at ONE: Enter the Dragon. Naito owns a win over Pacio back in October 2016 at ONE: State of Warriors. Pacio avenged the loss at ONE: Conquest of Heroes when he ended Naito’s second championship reign while beginning his first.

Setting up a third and deciding bout between the only two-time champions in ONE strawweight history makes a ton of sense. Depending on the card, it’s an instant main or co-main event bout. If it were to happen in Japan, it could be even more epic of an event.

Speaking of epic events in Japan, a championship battle between Hayato Suzuki and Pacio would be even bigger than a meeting with Naito.

Like Naito, Suzuki has already defeated Pacio, but his win is the only one in the champion’s career that has yet to be avenged. The rematch was originally set up for January at ONE: Eternal Glory. Unfortunately, Suzuki suffered an injury and he hasn’t competed since November 2018.

Pacio took on Saruta as a late replacement for that date and wound up suffering the aforementioned loss that he would later avenge.

Pacio likely wants to get his chance to even the score with Suzuki. The Japanese veteran has only one loss in his career. Because of the win over Pacio and the near-spotless record, you’d have to believe Suzuki is the most formidable challenge Pacio could face at this point in his career.

If Suzuki is healthy, it would be great to see those two in a rubber match during the first quarter of 2020.

Who do you think Joshua Pacio should fight next?