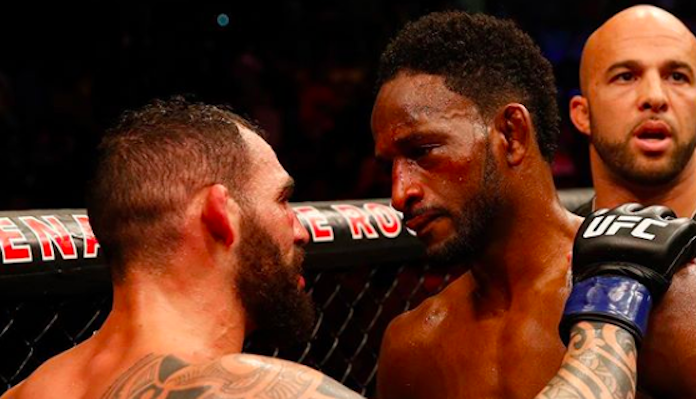 Early in the fight, Magny was able to bust up Ponzinibbio’s eye, which looked like a positive sign for him. Unfortunately, however, the American was then thumped decisively through the rest of the encounter, as Ponzinibbio battered his lead leg and ultimately removed his batteries with a right cross in the fourth round.

Having had to deal with Ponzinibbio’s speed and technique, and felt the full force of his power, Neil Magny is impressed —disappointed in his own performance, but impressed all the same.

“I think it’s pretty obvious [I’m] beat up,” the ever sportsmanlike Magny told reporters at the UFC Argentina post-fight press conference (transcript via MMAjunkie). “Beat up and disappointed.”

“Obviously it wasn’t my night,” he added. “His power was impressive. Whether it was a jab or a cross or a hook, I was still looking up wondering where that punch came from. He has speed in his hands, power in his hands, and precision with his punches.”

This knockout loss to Santiago Ponzinibbio, who is now calling for a title shot, signals the end of a two-fight streak for Neil Magny. In his last fight, which occurred in November, he authored a first-round drubbing of Craig White, who stepped in to replace the injured Gunnar Nelson on short notice. This win was preceded by a unanimous decision defeat of former interim champion Carlos Condit — arguably one of the best wins on his record.

Now 21-8 overall, Magny will now have to return to the drawing board, but remains one of the division’s key players, having picked up wins over names like Condit, Johny Hendricks, Hector Lombard and Kelvin Gastelum since joining the UFC.

Do you think Santiago Ponzinibbio’s striking could cause problems for the fighters in the welterweight top-5?