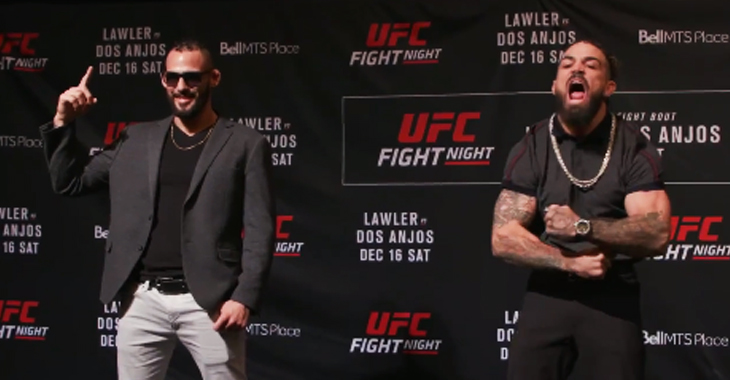 We all know that controversy follows the heavy-handed Mike Perry around. He’s also no stranger to creating ridiculous sound bytes that fans love to hear and us media enjoy writing about. What happened earlier today is no different. We don’t want to hype it too much, but it could be one of the all-time greatest staredowns in MMA history. What you’re about to see between Perry and Santiago Ponzinibbio is a staredown that mystifies as well as entertains. It’s an enigma wrapped around a 7-11 burrito, washed down with Mountain Dew Code Red. If none of that made sense, then you’re ready for the video.

Funny he was wearing sunglasses when he’s the one who pokes people in the eyes https://t.co/ZYFdeTit4h

“I see you’ve been playing Simon Says with them lights in the gym. What do you think that’s going to do for you? Yeah, I bet you don’t think much, huh? You ain’t very big, boy. Yeah, man. It’s alright. It’s our jobs, man. It’s okay. You’ll be alright. Play the guitar. Your chin is warm. This ain’t Karate Kid, boy. This ain’t a movie.” — Mike Perry speaking to a calm and collected Santiago Ponzinibbio.

We can’t even begin to decipher what most of that means, but it sure was fun. Mike Perry has some sort of insane Minoru Suzuki haircut and is doing Chris Benoit throat slashes. After either reciting mumbo jumbo or philosophical gold, he lets out a manly scream as Ponzinibbio does the Karate Kid crane kick pose. As Perry walks away, he gets shot with Ryu’s Hadouken from Street Fighter. If the fight is anything like this epic and bizarre staredown, this it is something that you can’t miss at all. These two welterweight contenders fight it out this weekend at UFC Winnipeg.