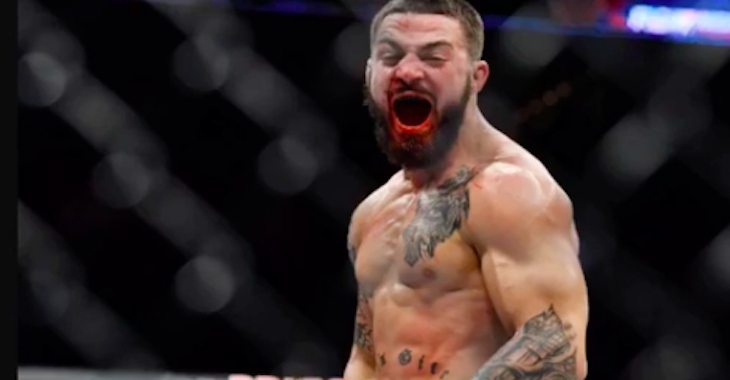 Originally, the welterweight star was expected to battle former UFC welterweight title challenger Thiago Alves. Unfortunately, however, Alves was forced out of the competition thanks to Hurricane Irma’s effects on Florida. He was replaced by promotional newcomer Alex Reyes.

Despite this last minute switch, Perry made the most of the opportunity, putting Reyes down with a thunderous knee against the cage. With this win, Perry reminded the world why he’s one of the hottest prospects at welterweight, and now, he’s looking to for a quick turnaround.

Post-fight the knockout artist suggested he’d like to fight at UFC 218 in Detroit this December – maybe against a former champ. Now, though, it’s looking like he could get back in there as soon as November, as he’s begun plotting a scrap with fellow welterweight brawler Belal Muhammad on Twitter.

The exchange began when Perry suggested he wanted to fight again soon:

Muhammad then inserted himself into the conversation, suggesting he’s down for a scrap.

Perry then asked Muhammad to pick a date, and encouraged him to get his manager on the case.

Muhammad then assured he’s free for either date. Sounds like we might just have a fight on our hands.

Let me check my schedule ..ok I'm free for either date 😎 https://t.co/cOJChcG7w7 With his win over Reyes, Perry moved onto a two-fight streak, as he knocked Jake Ellenberger senseless with an elbow in his next most recent bout. These wins were preceded by a decision loss to Alan Jouban, which was in turn preceded by back-to-back knockouts of Danny Roberts and Hyun Gyu Lim. He’s 11-1 in sum.

Muhammad, meanwhile, is also on a two-fight streak, having recently taken out Randy Brown and Jordan Mein. He’s 12-2 overall.

Do you want to see Mike Perry and Belal Muhammad fight? Join the conversation in the comments section!