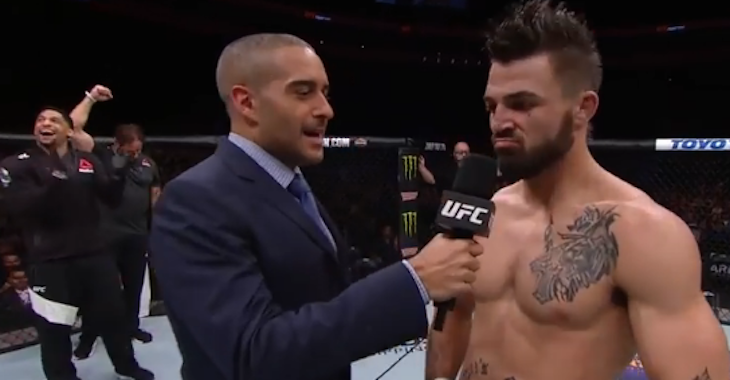 If things had gone according to the initial plan, rising welterweight knockout artist “Platinum” Mike Perry would have battled former UFC welterweight title challenger Thiago Alves in the co-main event of the UFC’s exciting stop in Pittsburgh last night. Regrettably, Alves opted to sit this fight out, worrying for his family in Florida as the threat of Hurricane Irma loomed.

With Alves out, the UFC quickly found a replacement opponent for Perry in Alex Reyes. While Reyes deserves props for taking this dangerous fight on such short notice, the fight itself did not go well for him, as he became the latest victim in Mike Perry’s knockout filled highlight reel.

In the wake of this latest knockout win, Perry made a clever callout of a dangerous knockout artist and former UFC welterweight champion in Robbie Lawler.

“I worked my butt off for this,” he said. “It was supposed to be Thiago in here. He ran from me, and now I think I deserve a top-10 [opponent]. I’ll give ya a name right now cause I know you’re gonna ask. Everybody wanna see me beat up Robbie Lawler.”

"Everybody wants to see me beat up Robbie Lawler." – Platinum Mike Perry#UFCPittsburgh

While the possibility of a Mike Perry vs. Robbie Lawler bloodbath is likely to excite many fans, it apparently doesn’t sound so great to Thiago Alves. Shortly after Perry’s win, the Brazilian striker took to Twitter to assure that, despite his withdrawal, he still owes Mike Perry an “ass whooping.”

I still have a ass whooping with @PlatinumPerry name on it. Don't talk yourself out, you got a gift this weekend and you know it! #easywork

“I still have a ass whooping with [Mike Perry’s] name on it,” Alves said on Twitter. “Don’t talk yourself out, you got a gift this weekend and you know it! #easywork.”

Would you rather see Mike Perry fight Thiago Alves or Robbie Lawler next?