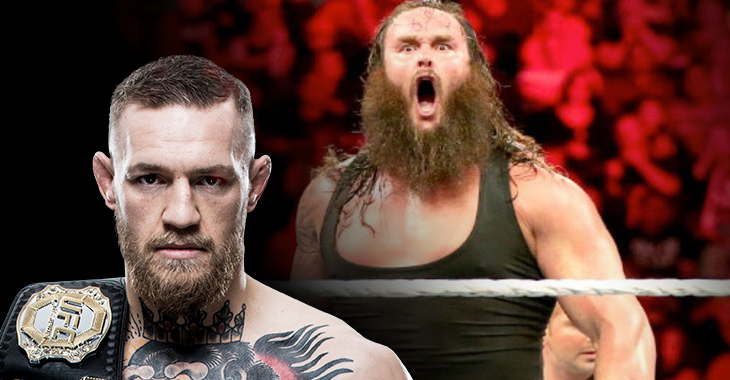 When you’re Conor McGregor, the world is your oyster. But sometimes, diving for oysters is dangerous. Sometimes, there are monsters in the deep. All this is just a convoluted analogy for the WWE’s monster-among-monsters, Braun Strowman. He was recently asked about McGregor in an interview ahead of his beastly battle this Sunday with Brock Lesnar, and doesn’t think the UFC lightweight champion wants anything to do with him.

“McGregor might make it on 205 Live, but he doesn’t want to step in the ring with me.”- Strowman said to Sports Illustrated.

For those non-wrestling fans, 205 Live features the WWE’s cruiserweight division, obviously Strowman is heavyweight. Although, even the largest weight class doesn’t seem to do him justice. He’s bigger than former UFC heavyweight champion freakin’ Brock Lesnar. If he would even debut in MMA, they’d have to bring back the Super Hulk division. It’s more than just a permeation of pop culture, McGregor’s name keeps getting brought up in the world of pro wrestling because he’s a draw. Just like Ronda Rousey, who gets airtime when she’s in the crowd and might be already involved in an angle. There’s no doubt that Conor McGregor could make money anywhere he goes. And while Strowman intentionally relegated McGregor to a smaller division, after Floyd Mayweather wrestled The Big Show, anything is possible in the world of WWE.