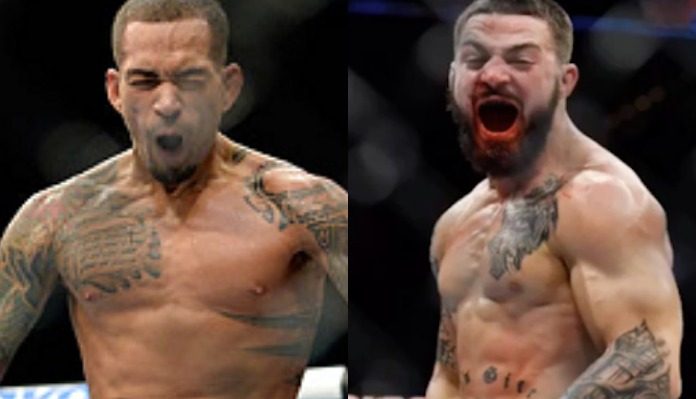 “Platinum” Mike Perry and Yancy Medeiros, two of the UFC welterweight division’s most exciting fighters, have been booked for a slugfest this summer. The pair will collide at UFC 226, which goes down on July 7 in the MMA epicenter of Las Vegas, Nevada.

This bout was first reported The Las Vegas Review Journal, and subsequently announced by the UFC.

Perry will enter this fight on a tough, two-fight skid, having recently given up decisions to Max Griffin and Santiago Ponzinibbio. This skid was preceded by back-to-back knockout wins over Alex Reyes and Jake Ellenberger, a decision loss to Alan Jouban, and a pair of KO wins opposite Danny Roberts and Hyun Gyu Lim. Perry is 4-3 in the Octagon, and 11-3 overall.

Medeiros, meanwhile, is also in the loss column, having recently succumbed to a volley of first-round Donald “Cowboy” Cerrone punches. This loss was preceded by a trio of impressive wins: TKO victories over Alex “Cowboy” Oliveira and Erick Silva, and a submission defeat of Sean Spicer. Medeiros is 6-5 in the UFC, and 15-5 in sum.

UFC 226 will be headlined by a heavyweight title fight between dominating divisional champion Stipe Miocic, and current UFC light heavyweight champion Daniel Cormier, who returns to the division after a prolonged hiatus.

The card will also feature the Octagon return of kickboxing star Gokhan Saki, who takes on Khalil Rountree, and a clash of bantamweight contenders as Rob Font takes on Raphael Assuncao.

Who do you think will come out on top in this newly announced Mike Perry vs. Yancy Medeiros showdown? Make your pick in the comments section below!