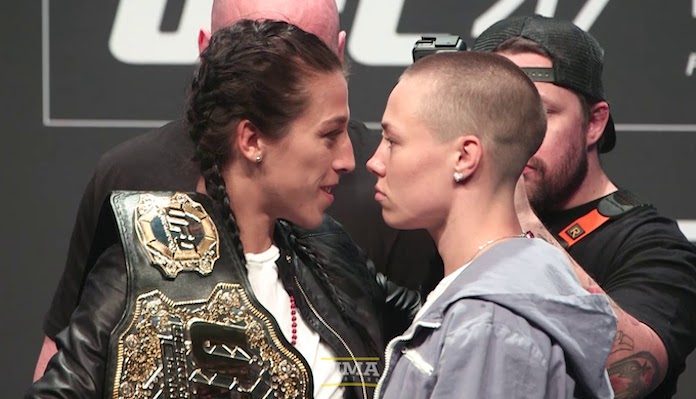 In November of 2017, long-time UFC strawweight champion Joanna Jedrzejczyk succumbed to a first-round knockout dealt by unheralded challenger Rose Namajunas, surrendering her title as a result. Earlier this month, in the co-main event of UFC 223, Jedrzejczyk failed to reclaim that title, giving up a close decision to Namajunas in the pair’s anticipated rematch.

While the judges awarded the decision to Namajunas in this rematch, however, Jedrzejczyk has repeatedly stated that she feels the fight should have been scored in her favor. Her main argument to this end is that she technically landed more strikes than her foe.

Speaking to a publication in her native Poland this week, Jedrzejczyk reiterated her belief that she won the fight, and went so far as saying one of Namajunas’ coaches and UFC President Dana White also scored the fight in her favor.

“Even Rose’s coach said after the verdict that I won that fight,” Jedrzejczyk told PolsatSport.pl this week (translated by Bartek Stachura).

“Numbers don’t lie,” she added, once again referencing her statistical advantage in the striking department. “[The] commission in New York is very young. They are still learning how to score fights.”

“Dana White was also a little bit disgusted by the scoring.”

As BloodyElbow points out, White’s post-fight comments indeed implied that he felt the fight was very close. They did not, however, reflect any kind of “disgust” with the scoring.

“Rose looked incredible. If you look at how much she has grown since the Ultimate Fighter, she looked amazing tonight,” White said at the UFC 223 post-fight press conference. “Joanna did too. It was a great fight. I had it 2-2 going into the last round.”

How did you score Joanna Jedrzejczyk and Rose Namajunas’s exciting UFC 223 rematch? Join the conversation in the comments section below.