‘Platinum’ Mike Perry has been the talk of the MMA community for the past several months. Ahead of his UFC debut, a welterweight scrap with Hyun Gyu Lim at UFC 202, Perry made headlines for his weigh-in antics, high-fiving ring girls as he walked on stage, before then faking Lim out with a handshake. When the pair stepped in the Octagon however, it took just over half a round for Perry to TKO Lim, and earn himself his first UFC victory. 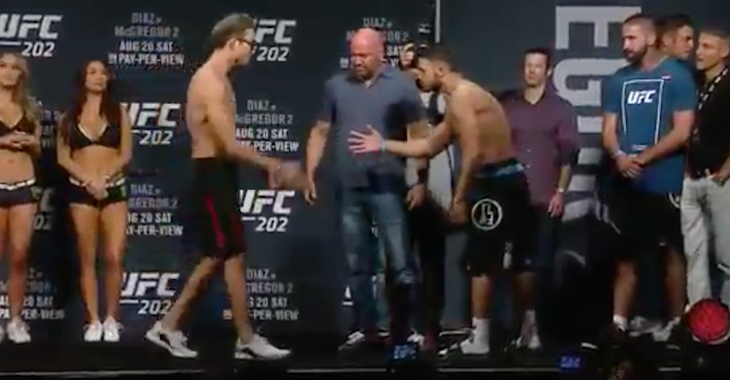 In his second UFC fight, Perry squared off against Danny Roberts in Manchester, England at UFC 204, where things looked even going into the third round. Perry delivered a knee followed up by a series of punches to finish Roberts, securing himself a 3rd round KO win.

Now, ahead of what is certainly the biggest fight of Perry’s career against Alan Jouban, he spoke with BJPenn.com to give his prediction for the fight, saying:

“I expect the fight to go my way, any way. He’s got good kicks. So we are just working on me keeping my hands up. Not to say that I haven’t fought before with my hands up. But I just fought against Danny without a care. But this time I’m going to keep my hands up and watch that left kick of his. And then every chance I get I am going to hit him. And if his jaw doesn’t break first then he’s probably going to shoot in an attempt to take me down. I will stuff him and then I will crush him. So I see it going my way no matter what.”

“I will say in the first. Because if I can lure him in to scrapping with me then I am going to break his jaw. But, I am thinking second because he is probably going to run. And if he runs well enough, I mean Danny ran a couple of miles in that cage against me, and if he is smart and tries to stick and move. Then he may survive the first. His only choice in this fight is trying to survive. If he runs the first, I will make the adjustment in the second, cut him off and put him to sleep. Guaranteed.”