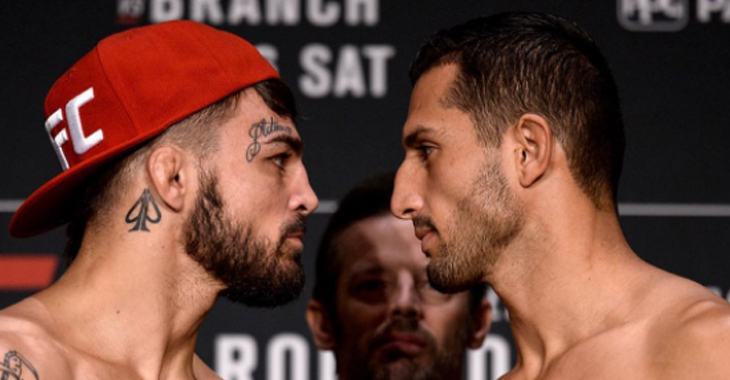 When Thiago Alves had to pull out of his fight with Mike Perry at UFC Pittsburgh, Perry didn’t bat an eye at the change of an opponent. Even though it was only three-days notice, Alex Reyes didn’t either. The former King of the Cage lightweight champion jumped at his chance to get into the UFC just like anyone would, but he wasn’t always this lucky. Last October, Reyes was supposed to step in to face Josh Burkman at UFC Fight Night 96 but had to turn the fight down because of an injury himself. Not only is tonight a redemption for Alex Reyes, but a chance to make a serious statement.

“It was heartbreaking at that time. You hope and pray that you get called up someday, you work your whole career, you work hard and you get that call, but you can’t [accept it] because of injury. It was tough, man. It was a tough injury. And I came back from it and I knew that if I ever got that call again, there was going to be no hesitation. Sh-t man, when I got that first call, I wanted to accept it anyway. That’s why it was so heartbreaking, because I wanted to say yes but my body couldn’t. It wasn’t even saying no, it just couldn’t. So as soon as I got that call [this week[, man, I was like, ‘Let’s go. I’m ready. No hesitation. I belong here.’”

Respect to my new opponent steppin up on 3 days notice. Let's see what you got Alex Reyes

“[Mike Perry]’s going to talk, he’s going to say what he’s going to say. He sounds like he’s overlooking me, and that’s going to be his first mistake that he’s making. I’m going to expose the holes in his game. It’s a little bit of pressure on him. I think he’s got a lot of nerves, he doesn’t know a whole lot about me. He was training for Thiago [Alves] and I’m a different fighter, probably he doesn’t know a whole lot [about me], and I’m very experienced. I think he’s nervous and he’s just talking to try to hide it, but go ahead. Go ahead and underestimate me, man. Go for it. But you shouldn’t.” — Alex Reyes speaking with MMA Fighting.

The injury not only kept Alex Reyes from his first shot in the UFC, but out of the sport completely for two whole years. He had his first fight back just over three weeks ago, finishing his opponent in just one round. He’ll look to keep up his 13-fight win streak, filled with nothing but finishes, against Mike Perry in the co-main event of UFC Fight Night 116 in Pittsburgh, Pennsylvania.