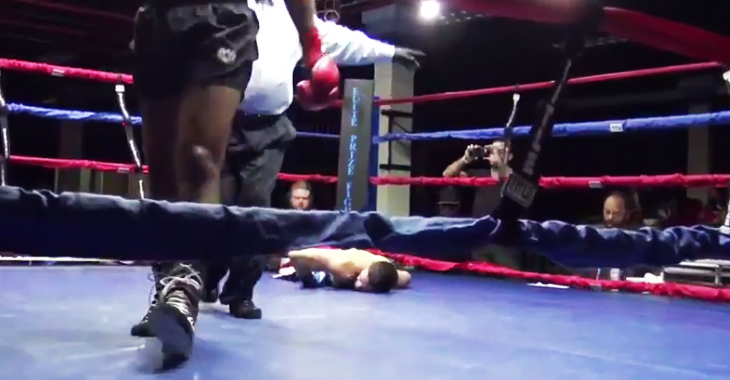 It wasn’t Mike Jackson’s lucky night back at UFC 196. For his professional MMA debut, he was under those infamous bright lights and was submitted by Mickey Gall in the Octagon, missing out on his chance to fight CM Punk. We all know how Gall’s bout with Punk went at UFC 203, but we haven’t seen Jackson back in the UFC again. …Yet. Instead, the place to find Mike ‘The Truth’ Jackson is inside the boxing ring. He’s undefeated so far with three straight knockouts. As of last night, he just raised that number to four by straight sleeping his opponent in a dominating performance.

Here's something to wet your whistle while you wait for #CaneloGGG… I call this shot the, "Pudding Pop". #Boxing #Pugilist #Fisticuffs pic.twitter.com/mjxwAPUE5l

“This boxing match was something for me to stay active. I would love to get a shot with a big boxing promotion like PBC [Premier Boxing Champions] or Mayweather Promotions. But right now, my top priority right now is CM Punk.” — Mike Jackson speaking to BJPenn.com‘s own Justin Golightly.

It seems that the trend now is MMA fighters trying to jump ship to the boxing ring, but Mike Jackson wants to do the opposite and get back into that Octagon. Even before his fight with Gall, Jackson believed he had the charisma and the marketing capabilities for bigger and better things. He’s also never stopped campaigning for that fight with CM Punk. In case you haven’t heard, Punk is planning his comeback and is currently training for that return right now. Could the planets finally align for Mike Jackson?

Thank you to everyone who came out to support. We're 4-0, 4 KO. #Boxing #HoustonStrong
📷 @AndyHemingway https://t.co/iZMqYVEoPi pic.twitter.com/X3X1gwEUTH

In an era where the booking of UFC fights is all over the board and divisions are in complete chaos, a fight with CM Punk for Mike Jackson actually makes sense. Both of them have one pro MMA fight against the same opponent, both of them even losing the exact same way. No word on who Punk may come back against, but it’s a sure thing that no one is marketing a potential smackdown with the former WWE wrestler quite like Mike.