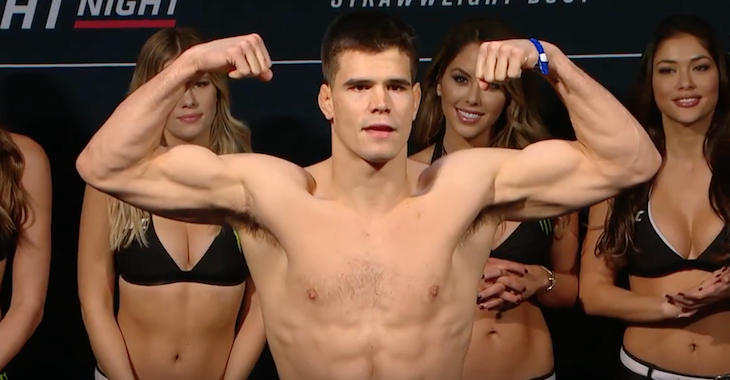 Mickey Gall, one of the brightest young stars in the UFC welterweight division, is set for a return to the cage at UFC 217, this November 4 in New York City. Gall, who rose to prominence on Dana White’s Lookin for a Fight web series, will battle a fellow product of the show, Randy Brown.

This bout was announced by the UFC on Tuesday morning (via Newsday).

Gall burst into the MMA limelight as the man tasked with welcoming WWE star CM Punk into the perilous world of MMA. As expected, the young prospect blew through Punk inside a round, announcing himself to the world in the most emphatic way possible. From there, Gall added to his reputation as a bright young prospect by submitting the highly regarded Sage Northcutt at a UFC on Fox show in December. With this latest win, the young fighter improved to 4-0 overall, and 3-0 in UFC.

Brown, meanwhile, recently had his momentum halted by Belal Muhammed. Prior to this loss, he picked up stoppage wins over Brian Camozzi, Augusto Montano, lost a by submission to Michael Graves, and beat Matt Dwyer by unanimous decision in his UFC debut. He’s 9-2 in sum. UFC 217 already looks like one of the biggest cards of the year.

The card will be headlined by a middleweight title fight between reigning champ Michael Bisping and former welterweight champion Georges St-Pierre. The co-main event, meanwhile will see reigning bantamweight champion Cody Garbrandt attempt to defend his title opposite his arch rival, former training partner TJ Dillashaw. The next biggest fight on the bill, finally, is a third title fight: a newly announced strawweight showdown between champ Joanna Jedrzejczyk and challenger Rose Namajunas.

Do you think Mickey Gall will stay undefeated against Randy Brown at UFC 217?