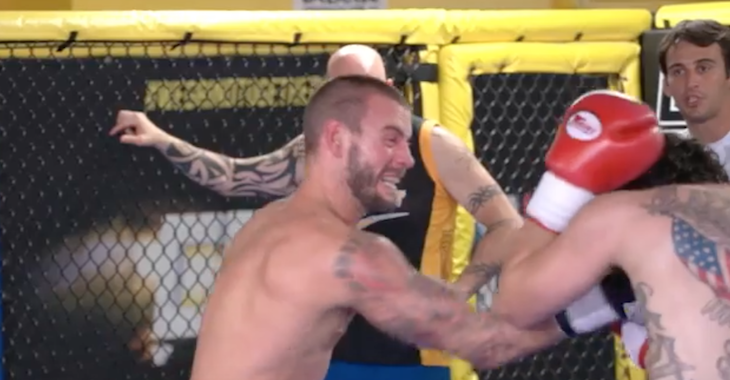 Next weekend, former WWE superstar CM Punk will make his first foray into mixed martial arts. He’ll be taking on talented 24-year-old Mickey Gall on the main card of UFC 203.

Prior to his signing with the UFC, which was announced on the main card of UFC 181 back in 2014, Punk had no real martial arts experience. Given this experiential deficit, he’s been given very little chance against Gall–who has only had 2 pro fights himself.

In advance of Punk’s debut, the UFC has released an interesting documentary series called “The Evolution of Punk.” The series documents the former pro wrestler’s journey into the perilous world of mixed martial arts, from his first days in Duke Roufus’ Milwaukee gym, to his final weeks of training for UFC 203. And while this series is irrefutable proof of Punk’s work ethic, heart, and self-belief, it’s also proof that even after all his training, he’s still quite raw. At least, that’s the impression Gall is under.

“He moves like food,” Gall recently told Fox Sports. “He moves like a wounded animal. I just don’t see it in him. He’s with a great camp so I’m sure he’s improved a lot, it’s just not going to be enough. There’s nothing I can see other than me dominating him.”

Given his experiential edge, Gall feels that he’s obligated to dominate Punk–not just beat him. Anything short, he believes, would be a disservice to mixed martial arts.

“I have to set an example and make an example out of him,” Gall explained. “Anything less than me dominating him and devastating him, I would be underperforming. So I do feel the burden to represent MMA fighters, but I welcome that. I want to represent for all my fellow MMA fighters.”

So, do you give CM Punk any chance against Mickey Gall at UFC 203, or is the pro wrestling export cruisin’ for a bruisin’? Sound off, PENN nation!