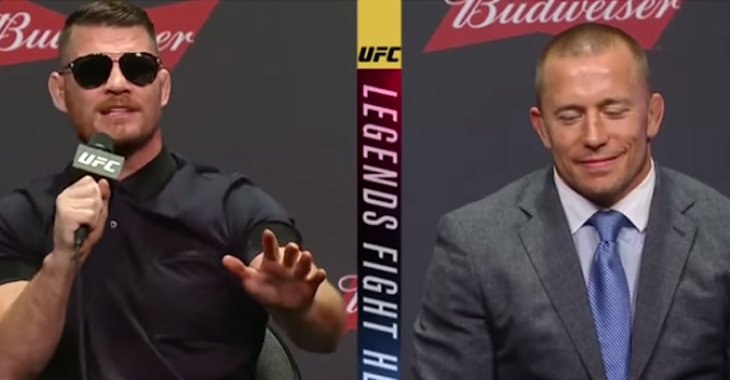 We’ve still got UFC 216 touching down tonight, but yesterday the press conference for UFC 217 blasted off. We mean that more literally than you think. Michael Bisping hit the ground running, digging into his opponent Georges St-Pierre with verbal jabs. St-Pierre, or anyone else for that matter, could barely get a word in edgewise. Of all the things he said, one being calling GSP a ‘lizard’, one statement just glows a little bit brighter than the others. He said that the reason St-Pierre didn’t return sooner, is because Johny Hendrick’s hit him so hard he thought he had a close encounter of the third kind.

“[Georges St-Pierre] didn’t want to fight because Johny Hendricks hit him in the head so many times, he thought he’d been abducted by aliens. I’m surprised you’re not wearing a tinfoil hat today to stop the messages coming. Dude, I’m going to hit you so many times, you’re going to think you’re going to disappear on the mothership.” — Michael Bisping to Georges St-Pierre at the UFC 217 presser last night.

If this all sounded really strange to you, chances are you’re not familiar with GSP’s own admission that he could have been visited by aliens. He was never sure what it was, but he talked to Joe Rogan on an infamous episode of the Joe Rogan Experience and opened up about it and his fear of extraterrestrial beings. St-Pierre claimed this has happened since he was a child, but Rogan (and Michael Bisping in the form of an insult) thought this may have something to do with health consequences from his fight career.

“I think Georges [St-Pierre] should retire. One of the reasons I think Georges should retire is he was on my podcast and he was talking about being abducted by aliens. I was going, ‘You think you’ve been abducted by aliens?’ … He starts talking about missing time. He started talking about how he’s driving his car and all of a sudden he’s at home and he has no idea [how] he got there. … I think it’s head kicks and punches.” — Joe Rogan back in 2013  on the Opie and Anthony show.