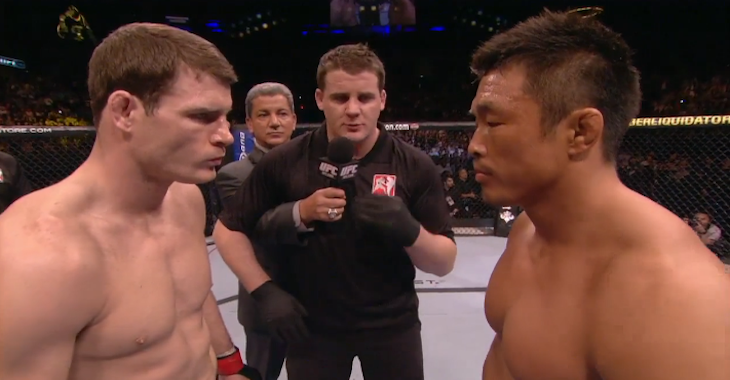 Earlier this year, in the main event of UFC 199, Michael Bisping shocked the world by scoring a beautiful, first-round knockout over middleweight champion Luke Rockhold. Earlier this month, the Brit defended the middleweight title he stole from Rockhold with a hard-fought unanimous decision victory over a former foil in Dan Henderson. Unexpected as it is, Michael Bisping’s reign as middleweight king continues to trundle along.

Bisping’s road to this career high, however, was not an easy one. The Brit experienced plenty of ups and downs between his victory on season 3 of The Ultimate Fighter and his title-winning upset of Rockhold. Some of the low moments along Bisping’s march to gold were losses sustained in bouts with Wanderlei Silva, Chael Sonnen, Vitor Belfort, Tim Kennedy, and in his first fights with Rockhold and Henderson.

That latter battle occured on this very day in the year 2010, in the main event of UFC 120 in London, England. See the Tweet below for some clips of the fight.

#OnThisDay in 2010: Current champ Michael @Bisping was on his long journey to the middleweight belt!
https://t.co/EdlxeCEXdy

Bisping’s battle with Akiyama was a memorable one.

It began with Bisping being rattled in the early moments, only to weather the storm and start landing his own offense as the encounter progressed. Despite the adversity he faced early, Bisping was ultimately awarded a unanimous decision win on the strength of his efforts in the later rounds. Both fighters also walked away with Fight of the Night bonus checks.

Though Bisping has reached towering highs since then, Akiyama has endured a much rougher stretch. After his loss to Bisping he was chased down to the welterweight division by a ferocious Vitor Belfort. From there, he sandwiched a nice win over Amir Sadollah between decision losses to Jake Shields and Alberto Mina. Now 41 years old, he has not been seen in action since that lost to Mina. Did you watch Bisping and Akiyama’s memorable 2010 scrap? What did you think of it?  Sound off in the comments, PENN Nation!