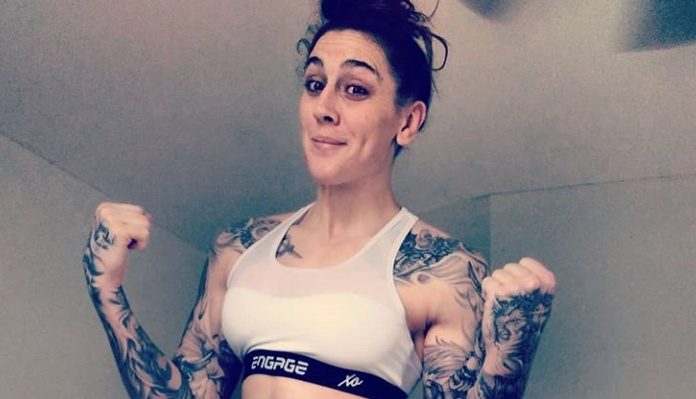 Finally set to make her long-awaited UFC debut is the former Invicta FC featherweight champion, Megan Anderson. Anderson will be making her debut at UFC 225 on June 9th when she takes on former UFC bantamweight champion, Holly Holm.

Since the UFC’s inception of the women’s 145-pound featherweight division in February 2017, they have essentially had just a two-person roster if you only count fighters that have never fought below 140 pounds. Those two being Anderson and the reigning champion, Cris Cyborg.

Just a few weeks ago, the UFC announced that they were about to start getting serious regarding actually getting the division rolling after a full year had gone by and announced that season 28 of The Ultimate Fighter will feature the women’s 145ers.

When speaking with Engage recently, Anderson expressed the irony in waiting so long to finally do something with the division now that she is cleared to return.

“I think it’s really ironic that the UFC hasn’t done anything with the featherweight division the last year, then I’m booked to fight and all of a sudden they’re wanting to create a TUF. I really believe that I’m a very important part in building this division and I think the UFC sees that… I feel like this fight is really important for the growth of this division.”

It’s hard to argue with Anderson there. Especially when any true featherweight would be an important key to the division at this point.

When it comes to working on the division’s growth, the champion, Cyborg has been vocal about wanting to help out with this process herself. But she also has other plans at the same time.

Appearing to be looking to explore options in boxing and taking some MMA super fights thus potentially fighting her way out of her UFC contract, there could be a slight possibility that Cyborg and Anderson never end up meeting in the Octagon. Although Anderson says she isn’t all that worried about that happening, she admits that she would definitely be disappointed if she didn’t get to face the longtime ruler of the division.

“To be honest, I don’t really pay too much attention to what Cris Cyborg says. All I can really focus on is me and my career and what I’m doing.

I definitely would be disappointed [if the fight didn’t happen]. I love that fight and hopefully we do get to have that showdown.”

But for that fight to even be in the discussion at the moment, Anderson needs to get past Holm on June 9th and she is very excited to show the world the improvements she’s made.

“I haven’t had to focus on cutting weight or dieting, all that kind of stuff, so I’ve really been able to focus on improving everywhere. I feel like I’ve changed so much in the last year – of just really showing my improvement and my evolution as a martial artist, really. I’m really excited to showcase that more than anything.”