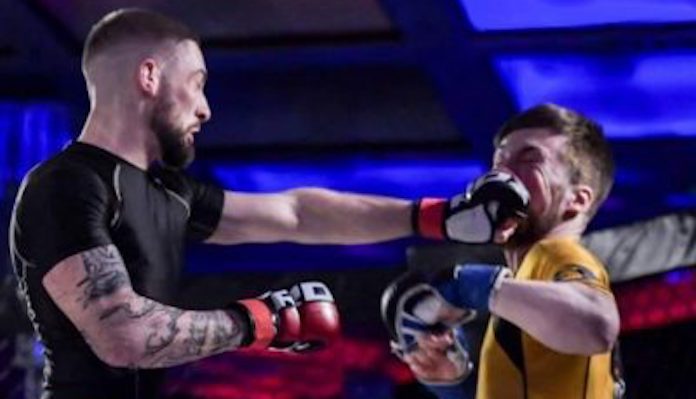 Cork is a county steeped in rebellion, which dates back to the 15th century, due to the encroachment of English forces on Irish soil, and more recently the 20th century, where it played a prominent role in the Irish War of Independence (1919-1921) when it was the scene of considerable fighting.

Like his ancestors, O’Connor as a young boy was drawn to fighting out of a need to protect what was his right, however on this occasion it was the right to have peace of mind.

“I spent the early days of my childhood in Mahon, Cork.” Ryan tells me, “When I was seven we moved to a small village in North East Cork and I found the countryside really quiet and ‘clannish’ in comparison to Mahon – Mahon is just outside of Cork City centre. I was bullied quite a bit and that’s what drew me to combat sports – the need to be able to take care of myself and I was hooked – instantly.”

“Boxing was always on my mind…” He continues. “I’d spend every waking hour watching footage and studying fight styles – all rented from the local Xtra – Vision in the next town.”

At this I can’t help but smile, Xtra – Vision being a video rental outlet here in Ireland that in recent years struggled to stay afloat against the popularity of online streaming, closing finally in January of 2016. It is a name that will soon be forgotten by the upcoming generation.

It wasn’t until the year of 2012 however, when O’Connor moved back to what some in Ireland refer to as the true capital (as a Dubliner I strongly disagree with this sentiment!), Cork City, that he was introduced to the sport of MMA.

“I moved back to the city suburbs at 19 and I joined a martial arts club in the area. Initially to box…then I tried the small gloves. I found the changeover really… frustrating at first. But… to be honest, that was probably due to the type of mentorship I was getting.”

O’Connors first foray into the world of MMA however was brought to a sudden halt when he suffered a broken wrist in training.

This injury was to be a catalyst in Ryan’s decision to step away from combat sports for the lengthy period of five years.

“For a few years life got in the way…” Is all that he offers, “but I started building myself back up in the gym with the goal of getting back to fighting and I got hooked on weightlifting.”

Yet throughout this time, where O’Connor built his frame to a muscular 90kg, fighting was never far from his mind. In 2016 he was to find Straight Blast Gym, an affiliate to Coach Kavanagh’s SBG Dublin Gym, in Cork City.

The phrase a happy fighter is a dangerous fighter comes to mind as O’Connor talks energetically about SBG.

“The atmosphere in this place is second to none. It feels like home. But the gym wouldn’t be where it is today without the backbone that is Marlene Griffin. Always smiling but she’s tough enough too to keep us all in check! I’ve been training here now since 2016, under head coach Liam Og Griffin. The passion that man shows for his sports and his students is commendable. We’ve our wrestling coach Graham McCormack, he’s like an encyclopaedia…not only on wrestling knowledge but the mental health and mindfulness side of MMA and life in general. Then we’ve our BJJ coach, Ryan Spillane, who’s also an MMA fighter. He’s taken the reigns of the fundamental class. It’s a great environment for his students to grow. It’s a privilege to be a part of the gym.”

While O’Connor’s muscular build within the featherweight division, tailored in large part by Momentum Performance and their strength and conditioning programme, gives him an undeniable advantage in the cage, it is his teams awareness and insight into the mental side of the fight game, which helps him to reach optimum performance.

“My coach, David Galvin, has a master’s in sports physiology and we both share an interest in how the human body works, and ways to improve it – I’ve also a background in biomechanics. This scientific approach to training…it’s given me huge improvement in my movement inside the cage and it helped to smoothen my transition to MMA. In the gym we also have our own sports psychologist and mindfulness coach. James White has helped me in a big way in understanding and using fears and adversity to my own gain.”

As Ryan later somewhat stoically reflects on his first MMA loss, I can’t help but see the benefits regarding the acumen of his coaching staff in action.

“Experiencing my first loss was a definite low point. Like, it wasn’t even the loss in itself…more so how it happened. It was my second ever fight, which was on Cage Legacy 3 in Cork. I got a knee below the belt and the referee didn’t spot it. I couldn’t recover and ended up losing via TKO from a ground and pound. I didn’t dwell on it though, and there’s no bad blood between myself and the other guy. It was a genuine accident…there was no ill ‘;intent. I was straight back in the gym looking to fix any mistakes I made during the fight. I took a lot of positives away and learned from the negatives.”

It was this determination to right any mistakes in those opening fights that has resulted in O’Connor being selected to compete at the IMMAF European Championships in Romania this June, something which after only two years in the sport, he is deservingly proud of.

“I’m really honoured and humbled to get the opportunity to represent my country and fly the Irish flag.” He tells me. “I’ve put in a lot of work in the short time I’ve been in this sport – I’m thrilled it’s paid off.”

Relatively new to covering the Irish MMA scene myself, I then asked Ryan to share his thoughts on it.

“The MMA scene in Ireland…” He reflects, “Well, it’s one of the fastest growing sports here. The talent that we have is amazing. Just look at some of the amateurs at the moment. You’ve the likes of Lee Hammond and John Mitchell making waves internationally and that’s just at ammy level! And as far as exposure goes in Ireland I think the media outlets here are extremely good at promoting athletes and events at a grassroots level with the likes of MMA Connect TV and Fightstore Media covering events and fighters nationally… then there’s The Evening Echo and LethalMedia.ie providing local exposure here in Cork… these are all great platforms for fighters to gain recognition.”

As it stands, Sports Ireland, our countries statutory authority which directs the development of sport, does not recognise the Irish Mixed Martial Arts Association (IMMA) as a national sports governing body. This is something that Ryan inevitably touches on.

“If you combine the ability here with the safety regulations like, you have a world leader. We can definitely be a platform for other countries to follow – for example with Safe MMA Ireland. All fighters in Irish MMA must be cleared by MRI and have blood tests twice a year in order to fight, on top of pre and post-fight examinations. The safety protocol of Irish MMA by far surpasses that of any other combat sport. I hope that through getting exposure on the different media outlets, it’s seen in a more positive light by the government and the sports council of Ireland.”

With fighters often stating that your true nature is revealed upon stepping into the Octagon, I wanted to know what O’Connor has personally taken away from the fight game.

“I think my mental toughness has grown considerably since I began competing in MMA and BJJ. I’ve learnt to smile in the face of adversity. I’ve learnt that without placing myself in these adverse and difficult situations, I can’t grow. I’ve a newfound understanding of discipline and being humble…I’ve have grown as a fighter, a coach, and a person, thanks to MMA.”

And what does 25-year-old O’Connor envision for the future?

“I would like to become involved in coaching down the line, but right now my goal as a mixed martial artist is to make a sustainable living from the sport and to do that you really need to make it to the highest level. The UFC I think is the aim for all fighters that are serious about martial arts.”

Fight fans in the U.S, watch this space…

As a relatively well known MMA fighter who hails from Dublin once said, ‘we’re not here to take part, we’re here to takeover.’

If you enjoyed this interview, stay tuned to BJPENN.com for more in the fighting Irish series.