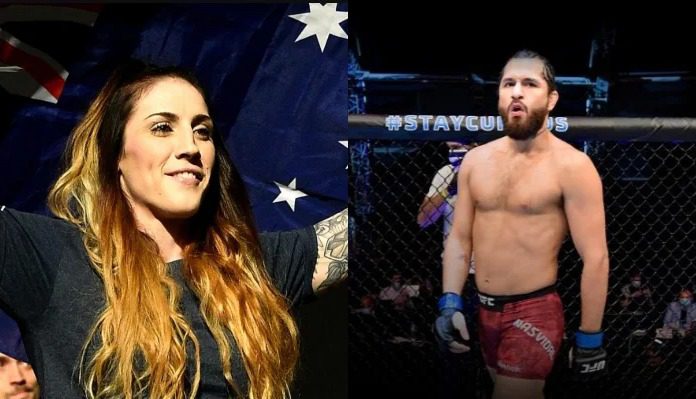 Anderson (11-5 MMA) has been out of the cage since coming up short in her featherweight title fight against Amanda Nunes at UFC 259. Shortly following that setback, it was revealed that the Aussie’s contract had expired with the UFC and she was now a free agent.

Megan Anderson has since stayed busy by working for Invicta FC, filming her first movie and doing “Megan’s Corner” on ESPN SportsCenter Australia.

During her most recent segment, Anderson was asked to weigh in on the future of Jorge Masvidal. ‘Gamebred’ is of course coming off of three straight defeats, his most recent being a lopsided decision loss to Colby Covington at UFC 272.

The former Invicta FC champion opined that the UFC should look at introducing a new 165lbs weight class while making Masvidal the “poster boy”.

“Masvidal is a guy that he’s not going let the same mistake happen twice. You know, I won’t be surprised if he goes away and does what he says he is going to do and comes back as a better fighter. Now, as in who’s next, he has only fought two people.. No, three, including the champion, in the top-15. He hasn’t fought anyone. He’s fought Stephen Thompson, Colby Covington and he’s fought Kamaru Usman who is the champion. There are so many fights for him to make, Belal Muhammad, Vicente Luque. He has so much potential in this division and stardom to continue with all of the fights that could be made. As we have seen he is a huge draw.”

“One thing that I think is really pertinent to Jorge Masvidal is he could be the ‘poster boy’ for the 165lbs division. I think, personally I think he’s too small for the welterweight division but he is too big for the lightweight division. There is a fifteen pound gap (between divisions), it is huge, and I think that he would be the perfect person to really kickoff that new division that I know a lot of the guys want.”

Do you agree with Megan Anderson that Jorge Masvidal would be the perfect “poster boy” for a new 165lbs division in the UFC?