Luke Rockhold explains why he smeared blood on Paulo Costa at UFC 278: “It was just a f*ck you”

Last Saturday night in Salt Lake City, the 37-year-old returned to action. The co-main event with the Brazilian was Rockhold’s first contest in over three years. Despite the time off, the former champion didn’t miss a beat.

The two middleweights put on a show in Utah. Costa did most of the better work, bloodying up Rockhold throughout the contest. However, the former middleweight champion landed some massive shots of his own, rocking his foe on several times.

In the final seconds of round three, the middleweights took the fight to the mat. The Brazilian got the submission ace’s back, but not for long. Rockhold turned into Costa and ended in full guard. There, the 37-year-old smeared his blood onto his foe below him.

Luke Rockhold went on to lose the fight by unanimous decision but was praised for his performance. In his post-fight interview, the former UFC middleweight champion retired from active competition.

Now, on The MMA Hour with Ariel Helwani, the California native discussed his bout with Paulo Costa. There, the 37-year-old discussed the final seconds of the contest, where he smeared blood on his opponent. Rockhold stated the moment was nothing more than a final sign of defiance to his opponent. 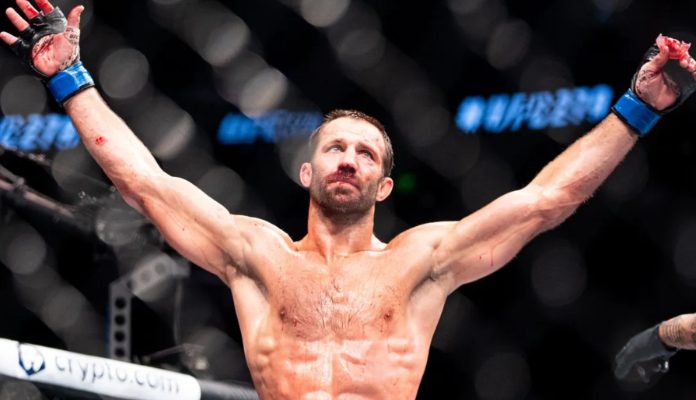 “It was just a f*ck you,” stated Luke Rockhold on The MMA Hour. “It was just like, what a f*cking b*tch, we were just talking back and forth. It’s like when someone is point-fighting and someone is going for the kill, there’s a difference. I was there to kill or be killed, and he was just out there trying to get by. Y’know, if more time existed, I rushed it and should’ve gotten mount position and it would’ve been over.”

What do you think about Luke Rockhold’s comments? Sound off in the comment section below!

This article appeared first on BJPENN.COM
Previous articleKhabib Nurmagomedov explains why Eagle FC will never partner with betting sites: “Gambling is more dangerous than alcohol”
Next articleDaniel Cormier hits back at idea that Leon Edwards win over Kamaru Usman was a fluke: “It’s not the first time he has knocked somebody out with this kick”
© Newspaper WordPress Theme by TagDiv