According to the Russian’s manager, Ali Abdelaziz, “The Eagle” is now focused on scoring a fight with former UFC welterweight and middleweight champion Georges St-Pierre.

“We believe the fight to make is the Georges St-Pierre fight at 155 pounds,” Ali Abdelaziz told MMAFighting’s Ariel Helwani. “Khabib wants to fight for legacy and not for a soap opera drama show, and we think Conor doesn’t deserve this opportunity. The guy hasn’t fought in almost two years. Why does he deserve to fight for the title? He should get his ass back in the line and work his way up.”

Conor McGregor has not stepped foot inside the octagon since his historic win at UFC 205 where he earned the promotions lightweight title by knocking out then champion Eddie Alvarez.

With his emphatic victory over “The Underground King”, Conor McGregor became the first fighter in UFC history to hold two belts simutaneously. 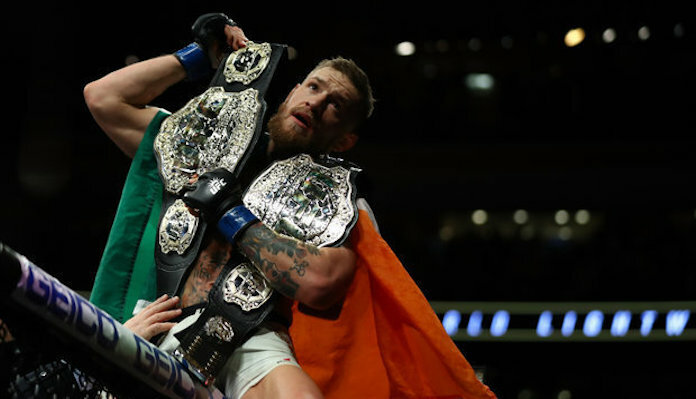 “Mystic Mac” would eventually be stripped of both titles, most recently his 155-pound strap which is now worn by his bitter rival Khabib Nurmagomedov.

Conor McGregor’s long-awaited return to the UFC could be further delayed by his upcoming court case, which stems from his attack on the UFC Fighter bus this past April in Brookyn.

With that said, Ali claims that the only reason his fighter “The Eagle” would fight the Irish superstar is to make him pay for what he did in Brooklyn.

“There’s only one reason Khabib wants to fight him: to make him pay for what he did [in Brooklyn]. For Khbaib, it’s not only about money. It’s about disciplining him.”

“That being said, UFC should be talking to Georges, not Conor.”

Who would you like to see Khabib Nurmagomedov fight next, Conor McGregor or Georges St-Pierre? Sound off PENN Nation!