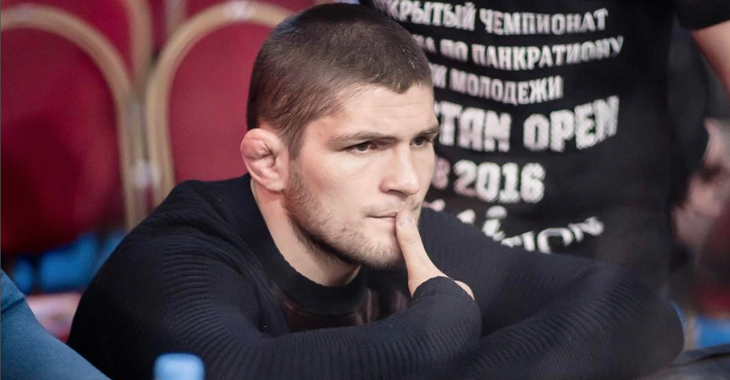 On April 7, interim lightweight champion Tony Ferguson and undefeated contender Khabib Nurmagomedov will battle for a lightweight title. Will it be the interim title currently owned by Ferguson, or the undisputed title currently owned by Conor McGregor? Dana White was incredibly unclear when asked about this at a press conference in Boston, refusing to say whether the UFC will strip McGregor of his undisputed title, but also assuring the winner of this Ferguson-Nurmagomedov fight will be the champion…

Whatever the case, Khabib Nurmagomedov has some interesting ideas if he wins. For one, the undefeated grappler seems to be considering denying Conor McGregor a shot at the title upon his long-awaited return to MMA.

“I’m gonna make humble Conor,” Nurmagomedov said during last weekend’s MetroPCS UFC 220 Livestream (h/t MMAFighting). “I’m gonna beat Tony and I’m gonna say to Conor, ‘Hey, you have to go into the [contender] line,’ because you have to deserve this. He has only one fight at 155 [pounds]. I am 25-0 at 155. Undefeated. Undisputed.”

“I’m going to take this belt, and we’ll see what happens.”

McGregor, of course, is one of the most sought-after opponents in the game today. When you fight him, you tend to make the big bucks. Apparently, however, Nurmagomedov is more interested in his legacy than his bank balance.

Whatever happens with McGregor, Nurmagomedov first intends to smash Ferguson at UFC 223.

“I have a tough opponent,” said Nurmagomedov. “Tony Ferguson, for my opinion, he’s real champ, and I’m gonna smash this guy. This is my plan. I’m going to smash this guy, make this guy humble too because he’s a little bit stupid. He’s tough opponent, very good fighter, but personality, I don’t like him.

“I have to come to show [with] no injuries, make weight, and that’s it. Somebody has to close us inside the cage and that’s it. I’m gonna beat him everywhere. My grappling is a different level than him. He thinks he’s grappling with Eddie Bravo and he’s good on the ground but I’m gonna show him.”

Who do you think comes out on top in this Tony Ferguson-Khabib Nurmagomedov-Conor McGregor skirmish?