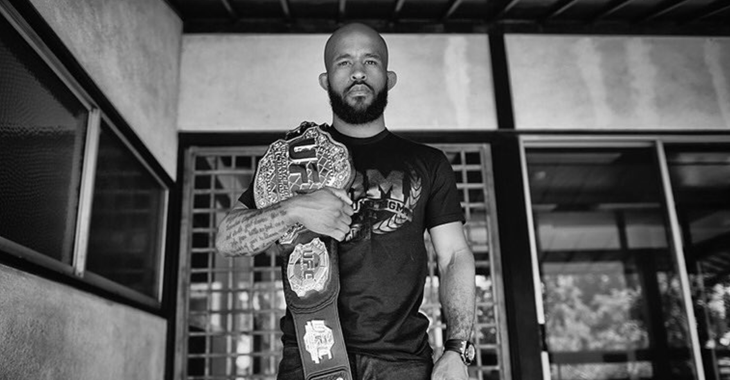 UFC flyweight champion Demetrious Johnson, who owns the record for most consecutive title defenses of any champion in UFC history, is currently recovering from a surgery. That said, he’s already eyeing his next fight.

While Johnson has expressed some disinterest in a potential fight with bantamweight champion TJ Dillashaw in the past, he seems to have come around. Speaking during a MetroPCS Q&A in the buildup to UFC 220, Johnson announced that he’s hoping to fight Dillashaw this July, on a big card in the midst of the UFC’s International Fight Week.

“Recovery is going good,” Johnson said. “I had rotator cuff [surgery], labrum and joint clean-out. After 11 title defenses and 12 championship fights, the old dog needs to get some rehab. I got it cleaned up. [With] six weeks recovery, we can get strong again, and hopefully TJ. Dillashaw can get this match done. Hopefully July, International Fight Week, on a big, big card.” Ever since he reclaimed the UFC bantamweight title with a second-round knockout of Cody Garbrandt, this is the fight TJ Dillashaw has been begging for.

“This isn’t a money fight,” he continued. “I mean, this is a money fight, because of the skill. It’s who’s the best pound-for-pound. It’s not some bullshit hyped drama. This is what the sport is really about, it’s who is the best in the world. Demetrious got that number one spot. I feel like I’m the best fighter in the world, man, and I just want to prove it. DJ has my spot and I want to claim it. I’m the best pound-for-pound fighter. I had a couple split decision losses that I didn’t agree with it. If you throw those ones out of the way, I’d be on a 13 fight win streak, seven fight title defense. I’d be where I’m supposed to be, but this is the way for me to get to where I want to be. Demetrious is on top and it’s time for me to take him out.”

Do you think a Demetrious Johnson vs. TJ Dillashaw fight is the fight to make?